Alcohol is one of the most socially widespread used drugs. It is also one of the most popular psychoactive substances in the world. Effects of alcohol on the body can be tremendous to affect your health as well as mental state.

The main ingredient is ethanol that is what makes you drunk.

Alcohol is prepared with fermentation and yeasts that break down sugar in carb-rich foods like grapes, which are used to make wine, and grains, to make beer.

HOW DOES ALCOHOL METABOLIZE?

A single drink delivers about 20% of the ethanol directly to the blood vessels. It then makes its way to your brain. The remaining 80% passes via your small intestine and into your bloodstream. Unlike fats and sugars, they cannot be stored later, and the liver prioritizes digesting alcohol over carbs and lipids. Your liver converts the ethanol to acetaldehyde with the help of an enzyme called alcohol dehydrogenase (ADH) that enables metabolize ethanol. A second enzyme, aldehyde dehydrogenase 2 (ALDH2) then converts toxi acetaldehyde into acetate, a compound which can be safely metabolized in the body.

Alcohol effectively halts all digestive processes, causing fat accumulation in the liver, a precursor to fatty liver disease. Not only the liver, but our stomachs, pancreases, and even our brains help us deal with the effects of alcohol.

Although it is metabolized consistently, specific individuals may experience effects of alcohol for more extended periods because blood alcohol concentrations(BAC) differ between people and situations. So, our bodies can only handle a specific quantity of alcohol every hour, no matter how much we drink. The effect of alcohol on your body is determined by your age, gender, weight, medications, and alcohol type.

The effects of alcohol on your body begin the moment you take your first sip.

What is “The Asian Flush”?

Another notable effect of alcohol has been seen in some East Asian populations (Chinese, Japanese, and Koreans), face flushing is common who consume beer, wine, or alcohol. It is also known as Asian Flushing or Asian Glow. It occurs due to an inherited deficiency in the enzyme aldehyde dehydrogenase 2 (ALDH2).

It is a genetic condition that interferes with the metabolism of alcohol. As a result, adverse effect of alcohol can be considerable for people with ALDH2 deficiency due to the link to cardiovascular diseases, diabetes, neurodegenerative diseases, stroke and cancers, Fanconi anemia, pain and osteoporosis as well as the process of aging.

If you have Asian flush, take into account of the below points when drinking:

HOW LONG DOES ALCOHOL STAY IN YOUR SYSTEM?

The following are rough estimations by NHS for how long different beverages take to metabolize, though these timeframes will vary based on the amount of alcohol in the drink:

MODERATE DRINKERS. According to the “Dietary Guidelines for Americans 2020-2025“, drinking in moderation comes as restricting intake to 2 drinks or less per day for males and 1 drink or fewer per day for women,

HEAVY DRINKERS.  The NIAAA defines heavy drinking as up to 5 alcoholic drinks/ day for men and 4 for women and up to 14 drinks per week for men and 7 for women.

BINGE DRINKERS. The NIAAA defines binge drinking as consuming alcohol in quantities that exceed 0.08 percent (BOC). This amounts to 5 or more drinks (male) or 4 or more drinks (female) in around 2 hours.

SYSTEMIC EFFECTS OF ALCOHOL ON THE BODY

More than 200 diseases can be fully or partially attributed to alcohol drinking. The use of alcohol was ranked as the 5th leading risk factor of disease globally in 2010 (from the 8th in 1990). Well studied alcohol-related cancers include head and neck cancer, Esophageal cancer, liver, breast, colorectal cancers.

This table presents the effects of alcohol for moderate and heavy drinkers on the overall health and the major organs:

HOW MUCH ALCOHOLIC DRINK TO CONSUME?

According to the Dietary Guidelines for Americans, adults of the legal drinking age can choose not to drink or drink in moderation by restricting alcohol consumption to 2 drinks or less per day for males and 1 drink or fewer per day for women.

The amount of alcohol in one “serving” is determined by the percentage of alcohol in your beverage. Various brands have different alcohol contents inside them, so the specific amount cannot be determined unless you read the label. A normal drink contains 0.6 oz. / 18 ml / 14g of pure alcohol. This quantity is roughly typically found in:

WHO assumes 10 g of pure alcohol as one standard drink and recommends not exceeding 2 standard drinks per day and at least 2 non-drinking days during a week.

However, it is suggested to drink less or not at all for a healthy life.

EFFECT OF ALCOHOL ON HANGOVER WITH AGING

Hangovers are characterized by many symptoms connected to heavy drinking, such as weariness, headaches, increased light-headedness, muscle aches, increased thirst, dizziness, and cognitive and mood disturbances such as depression, anxiety, and irritability.  As we age, alcohol is not metabolized well; our bodies become less efficient in metabolizing alcohol due to lower liver enzyme activity and fewer liver cells. Hangover for such individuals can be managed with some small methods like drinking glasses of water before alcoholic drink, or choose a drink with a moderate amount of ethanol. 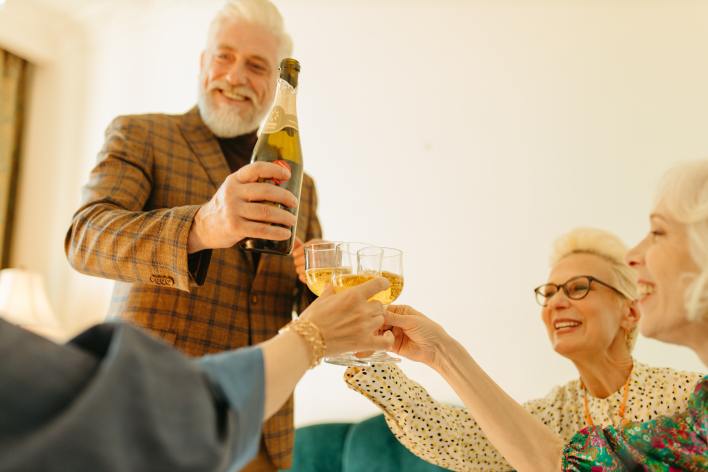 WHAT IS THE BEST ALCOHOLIC DRINK TO CONSUME?

These calories are due to the fermentation of sugars and carbs. Too much drinking, in whatever form, is harmful to one’s health. Of course, this does not imply that all alcoholic beverages are created equal. A stronger-tasting artisan brew with many calories is worse than a light, low-calorie beer.

Sugary cocktails or mixed drinks are the worst types of alcoholic beverages, as they contain many sugars. The one with the least calories and is similar in the satisfaction factor is red wine. 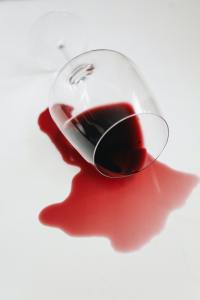 A glass of red wine with dinner has long been considered a “good” choice due to its apparent heart-healthy advantages due to the French Paradox (French people in the 1980s had very low health compromises even with a vast consumption rate of red wine with fatty stuff and meals like cheese). So the theory lies that red wine is mainly composed of antioxidants called Polyphenols, found in red and purple grape skins (and many other fruits, vegetables, and nuts), which are thought to protect the heart. According to a review paper on wine and cardiovascular health on Oct. 10, 2017, the effects of alcohol on the heart for wine are not as harmful as beer or heavy liquor.

According to a study conducted in 2008, accompanying red wine and red meat in a meal can slightly mitigate the oxidation markers hydroperoxides LOOH, malondialdehyde MDA caused by consuming red meat in the food. This is due to the polyphenols found in red wine.

Nonetheless, there are more foods of much higher polyphenols as below than red wine (101 mg per 100 ml); so getting polyphenols from drinking red wine isn’t completely justified – try consuming food of high polyphenols along with a meal with red meat:

For resveratrol, simply eating grapes or drinking grape juice would be a way to get it without drinking alcohol.

So, if you have to drink, keep it modest and consume a maximum of one serving of 5 oz. / 147 ml, a glass of red wine per day for women and 2 servings for men.

Your body doesn’t naturally crave alcohol. While it can cause so many important health problems for you, refrain from drinking is the easiest way to have a healthier life; check out this article to identify why one drinks and how to stop drinking.

23 Signs of Nutrient Deficiency in The Body and Thier Soultion.

23 Signs of Nutrient Deficiency in The Body and Thier Soultion.