You might have come across a pretty-looking vibrant colored tea with a bamboo whisk trending all over social media. Matcha has a beautiful color, but it’s also a nutritious drink that gives you energy for hours, has a distinct taste, and can be used in a wide variety of recipes. If you are in search of what wonders it can do to your body, then this article is all that you need to read.

Similar to green tea, matcha is crafted from the leaves of the Camellia Sinensis plant. It is an antioxidant-rich green tea created by drying and then grinding the tea leaves until they reach a very fine texture. The high chlorophyll content of the leaves gives it a somewhat bitter, vegetal flavor and a brilliant green hue.

Leaves for traditional green tea are steeped in boiling water and then thrown away. Matcha tea, on the other hand, is made by consuming a powder made from dried leaves. In addition to being the most fragrant kind of green tea, this variety also offers a refreshing, non-bitter flavor. It has been a staple of Japanese tea ceremonies for generations, and its health advantages have led to a surge in popularity in the West.

The complicated process required to produce matcha makes it more expensive than other forms of tea. It differs from other types also due to the process called shading. Through this method, green tea plants are shielded from sunlight for twenty days, which increases their chlorophyll and L-theanine content. This organic compound in tea has the properties of making us calm and soothing at the same time. After being kept in a cool area, leaves are deveined, de-stemmed, and stone-ground into fine powder.

Powdered Uji matcha, made from the smallest tea leaves, is often considered the finest variety of matcha in Japan.

Research has focused on green tea, but since matcha is also created from green tea leaves, you may reap the benefits as well.

Green tea extract has been extensively studied for its potential to help with weight loss, so it’s no surprise to see it in many weight-loss pills. According to the National Institutes of Health, green tea “increases energy expenditure and fat oxidation, decreases lipogenesis and fat absorption, and may have a moderate impact on body weight.” Taking green tea extract while exercising moderately accelerated fat burning by 17%, according to research. It has also been studied to raise the number of calories burned in a single day from 8-10% to 35-43% every single day. It has no side effects in terms of weight loss as compared to other dietary pills.

If you make matcha green tea a regular part of your diet, you’ll lose weight in a healthy way, and you won’t gain it back. Matcha green tea has been shown in a meta-analysis of 11 trials to aid in weight reduction and keep it off.

Matcha promotes cardiovascular health by lowering blood pressure and stopping the buildup of plaque and excess heart tissue, both of which can lead to heart attacks and other serious complications. Matcha is rich in micronutrients, particularly epigallocatechin-3-gallate (EGCG), a plant compound with beneficial health benefits. According to research published in the Journal of Ethnopharmacology, EGCG “contains a wide range of therapeutic properties including in terms of cardiovascular and metabolic health. Another antioxidant, Catechins,  in matcha tea, has been shown to reduce blood pressure, reduce inflammation, and inhibit clot formation, all of which are beneficial in preventing cardiovascular disease, stroke, and heart attack.

Also, Matcha drinkers have been shown to have a 31% decreased risk of cardiovascular disease compared to non-drinkers. (1) (2)

Catechins, an antioxidant found in abundance in matcha and other green teas, are responsible for many of the health benefits associated with drinking this tea. Food Research International cites studies that show that “Tea also includes flavonoids, chemicals considered to have antioxidant capabilities having several positive consequences.” The flavonoids in tea are anti-inflammatory, antibacterial, and work to protect teeth from decay.  Another component such as EGCG has the potential to lessen inflammation, support arterial health, and stimulate cell repair.

Matcha tea has ten times the amount of nutrients as normal green tea.

Antioxidants are substances that assist in preventing or reducing free radical damage. What other antioxidants are found in different foods that help us fight different conditions? Let’s have a look here.

Numerous matcha ingredients have been investigated for their anti-cancer effects and specifically for stomach cancer prevention. In a study of nearly 1,400 participants published in Cancer Causes & Control, green tea drinking was connected with a reduced risk of stomach cancer. Catechins and gallic acid, two phytochemicals found in matcha, have been used in combination with chemotherapy, and it has been investigated if they enhance the efficacy of particular chemotherapy medications.  Another study indicated that women with stage 1 and 2 breast cancer who drank eight cups of green tea per day had a decreased probability of cancer recurring and a longer disease-free time.

There have been studies that prove that cancer cells and tumors can both be killed or shrunk by catechin, as has been demonstrated in both laboratory and animal experiments.

Yes, drinking a cup of matcha before an important mental task can help you perform at your best. Matcha tea, which is rich in polyphenols, amino acids, and L-theanine, stimulates the production of alpha waves in the brain. L-theanine and caffeine were shown to have synergistic benefits on cognitive function and mood, with subjects reporting improvements in processing speed, accuracy, and memory. Matcha tea has the potential to deliver a more subtle and sustained energy boost than coffee. Moreover, Improved mood, memory, and focus have all been linked to L-theanine’s ability to boost serotonin and oxytocin levels in the brain.

A new 2022 study has also proven its effects on sleep quality and improvement in cognitive function of Japanese people.

Two particular components in matcha can also help improve your immune system, helping your body to more effectively fight off disease. These substances include catechins, phenolic compounds strong in antioxidants, and quercetin, a bitter molecule present in many fruits and vegetables.

Scientists have discovered that drinking matcha tea can boost your immune system by making more T cells. Although intriguing, the findings of one study indicate matcha green tea may have antiviral action (by inactivating SARS-CoV-2) but research is going on in this case further.

Green teas and matcha powder have several health benefits, including those for the skin. The study published in Food Research International suggests that “green tea ingredients may be effective topically for encouraging skin regeneration, wound healing, or management of certain epithelial disorders,” including aphthous ulcers, psoriasis, rosacea, and actinic keratosis. It is also studied for its sebum-controlling properties. The study investigating this tea’s effects on sebum production and acne revealed some evidence that tea polyphenols might be used to treat acne due to their sebum-reducing properties.

Matcha protects your cells from free radical damage, and that includes your sperm and egg cells, which are necessary for reproduction and development. According to a study of healthy Chinese men, those who drank tea had a greater total sperm count and sperm concentration than those who did not. Additionally, tea may improve the mobility of sperm and its ability to survive due to high caffeine levels in it.

Researchers have shown that the catechins and antioxidants in matcha may prevent DHT (dihydrotestosterone), a major factor in male pattern baldness. Because of this, you may have noticed an increase in the availability of shampoos and conditioners containing matcha or green tea extract.  (1) By activating hair follicles and protecting skin and hair cells from injury, EGCG present in matcha powder appears to promote hair growth.

According to many studies conducted on various populations, frequent consumers of Matcha green tea show both lower levels of LDL (read: bad) cholesterol and greater levels of HDL (read: good) cholesterol. HDL clears the arteries of the harmful cholesterol that causes atherosclerosis. (1) (2) (3)

In 2003, Vanderbilt University Medical Center completed the first human research showing that green tea lowered LDL cholesterol. Participants in the 12-week research were given capsules containing 375 milligrams of green tea extract each day. The polyphenol content of the capsules was equal to that of 35 cups of green tea or 3.5 cups of matcha. Results indicated a 16% decrease in cholesterol, which even the experts found surprising.

The daily caffeine limit for adults is 400 mg. 1 g of matcha tea has 35 mg.  Multiple studies on matcha tea powder have concluded that 2 to 3 servings per day is the appropriate amount to consume for optimal health, thus we recommend that adults make this part of their daily routine.

Matcha has a little level of nutritional value because of its lack of essential nutrients. However, caffeine and antioxidants are what provide health advantages. Some of the main well-researched components of matcha tea are mentioned below.

Matcha powder is the fine green powder that is produced after Tencha leaves are dried, then deveined and destemmed before being processed in a stone mill. 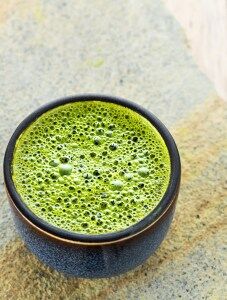 With a shelf life of around a year, matcha powder requires careful handling due to its short life cycle (think about the taste and the way it looks). 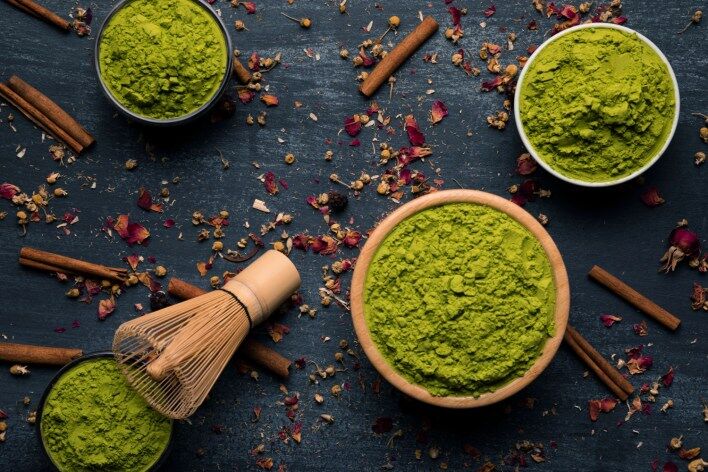 Matcha tea is one of the healthiest things you can consume, and the benefits far exceed any minor side effects for the majority of people. Those who use matcha often have no adverse effects. Since with other things in life, it is necessary not to overdo matcha, as too much of it (or any caffeinated tea) might induce a few minor adverse effects,

Research into the safe limit of matcha consumption is lacking. Matcha tea could have certain unwanted consequences, although they are likely to differ from person to person based on factors including age, body mass index, overall health, and the severity of environmental exposure. Except when directed by a physician, you shouldn’t exceed 500 milligrams of green tea extract or 400 milligrams of caffeine in a 24-hour period.

Matcha tea has become more popular in recent years, and it can now be found in a wide variety of products. Now that you are fully aware of matcha tea’s charm, you can see why it has been such a highly desirable product for generations. It may be consumed as-is by whisking it into hot water to make tea, or it can be added to a variety of other foods, such as soups, muffins, baked goods, dips, and more!  Whether you brew, shake, stir, or slip it into a smoothie, your taste buds and body will like it for sure.