Gut health has been a popular subject in recent years, as we’ve realized the pivotal role that the gut microbiome plays in the general health of our body. Consuming more probiotic foods is one of the most effective strategies to improve gut health. According to the National Center for Complementary and Integrative Health, probiotics are living bacteria that keep the harmful pathogens in check, assisting our body in maintaining a healthy balance, lowering inflammation, and enhancing gut health, among other benefits. Learn more about them in this article.

Why Fermented Foods?  Humankind has been fermenting foods and drinks like beer and wine for centuries. Foods that are fermented go through lactofermentation, in which natural bacteria feed on the sugar and starch in the food, creating lactic acid. This process creates an environment that preserves the food and promotes beneficial enzymes, B vitamins, omega-3 fatty acids, and probiotics.

Are you unsure what probiotic foods are or which ones are the most beneficial to consume? The specifics are as follows:

Yogurt is manufactured by fermenting milk with probiotics, primarily lactic acid bacteria and bifidobacteria. According to new research from the University of Toronto, various probiotics have varying benefits, and certain probiotic-containing yogurts may be healthier than others. Yogurt is by far the most frequently known and widely accessible probiotic food in the United States.

It is recommended by the American Gastrointestinal Association for digestive health and alleviates constipation, diarrhea, and other intestinal issues. There are now a variety of yogurt variations available in the market other than natural ones, but be cautious — specific flavored or low-fat versions may contain an excessive amount of sugar. Often, more probiotics are added to them as well. Almost 80% of commercially made yogurts contain Lactobacillus acidophilus, Lactobacillus casei, and Bifidus are all prevalent strains that may help maintain the balance of bacteria required to promote immunological function and digestive tract health. 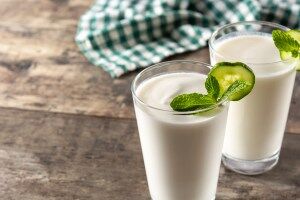 Kefir is a healthy fermented meal with a consistency close to drinkable yogurt. It is made by fermenting milk with freeze-dried kefir starter cultures, typical kefir grains, and the leftovers after removing the grains. Kefir grains contain up to 61 to 70 bacteria and yeast types, making them an extremely rich and varied probiotic food. The most prevalent bacterial genera observed in kefir are Lactobacillus, Lactococcus, Streptococcus, and Leuconostoc.

How many CFUs? Kefir contains 12 distinct strains of living and active cultures, as well as between 25 and 30 billion Colony Forming Units (CFU). Some studies also suggest 150 billion CFU per tablespoon or 2.4 trillion/cup.

So, the key issue is: how many probiotic foods will you need in order to be healthy? That is a difficult question to answer. 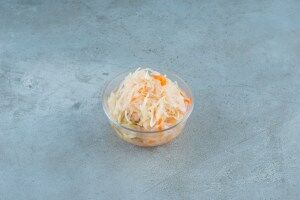 Sauerkraut, a product dating all the way back to the fourth century B.C., is a fermented cabbage brewed with lactic-acid bacteria, which means it’s beneficial for maintaining a healthy digestive tract. Additionally, we get fiber and chemicals that support the immune system. It is the most popular probiotic food in Eastern Europe.

How many CFUs? It has been studied that sauerkraut 1,000–100 million CFUs/ tablespoon. 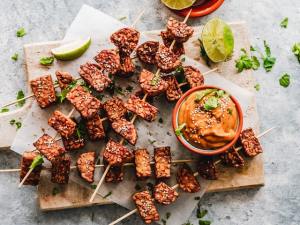 Tempeh originated in Indonesia but has gained international popularity as a high-protein meal replacement. It is a cake-like product produced from cooked and slightly fermented soybeans. A recent study examines the health benefits of fermented soy meals. Much research shows fermented soy is much healthier than regular soy. The fermentation method improves the soy’s digestibility, addressing issues including protein digestion and amino acid absorption. It may include beneficial bacteria such as Lactobacillus acidophilus, Enterococcus faecium, and Rhizopus filamentous fungus, among others.

Tempeh, like other fermented soy products, is deemed safe for the majority of individuals. However, some individuals may choose to restrict their tempeh consumption due to excessive amounts of soy in it.

How many CFUs? Tempeh contains roughly 10 billion CFU of probiotics per gram. 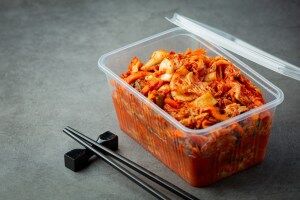 Kimchi is a Korean dish made from fermented vegetables such as Napa cabbage and Korean radish. It is traditionally served with a selection of seasonings, including gochutgaru, spring onions, garlic, ginger, jeotgal, and others. Kimchi was named one of the world’s healthiest foods in a 2006 edition of Health Magazine due to these excellent features.

How many CFUs? Kimchi has been found to have one hundred million CFUs/gram.

Although kimchi is a probiotic, it still includes live bacteria. However, improperly cooked or preserved kimchi might cause food poisoning. As a consequence, individuals with weak immune systems should avoid kimchi. 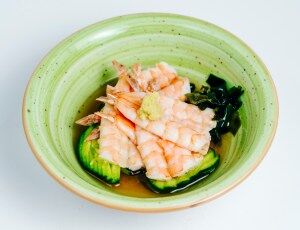 Miso is a Japanese cuisine staple made by fermentation of soybeans with salt and koji, a kind of fungus. The paste is available in a variety of flavors and is often used in miso soup. Additionally, it is high in vitamins B, E, K, and folic acid. Fermentation encourages the creation of probiotics, beneficial microorganisms that have several health advantages. Miso’s major probiotic strain is A. oryzae. Microorganisms present in this probiotic food may help lessen symptoms of digestive issues including inflammatory bowel disease.

Because high temperatures might destroy the probiotics in miso, it is recommended that it be used in cold foods rather than hot ones. As a result of this, certain heat-killed probiotic strains may still give some advantages. 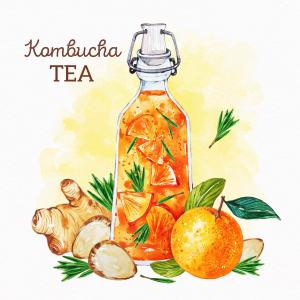 Kombucha is yeast and bacteria-fermented black tea. It has a somewhat acidic flavor that many people like. Due to the high sugar content, the fermentation process is vigorous, resulting in a thick gelatinous coating known as SCOBY (symbiotic culture of bacteria and yeast). A high-quality kombucha beverage will ensure that the digestive system receives the greatest quantity of beneficial gut flora. Two organisms that you may discover in kombucha are Acetobacter xylinoides and Acetobacter ketogenum.

How many CFUs?  Kombucha has around 10 billion CFU per gram in terms of probiotic value. 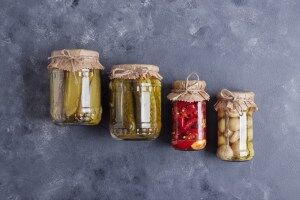 Pickles (also called gherkins) are cucumbers preserved in a salt and water solution. There are two types of pickles available, pickles made with vinegar and pickles made with saltwater and fermented by microorganisms found in and on the vegetable. Pickles produced with vinegar lack the beneficial bacteria potential of fermented pickles. Fermented pickles are a probiotic food, meaning they contain helpful bacteria that may help populate and diversify our gut flora.

How many CFUs? They have been found to contain almost 1 to 10 billion CFUs in a gram.

A variety of fermented dairy beverages are called “buttermilk.” Traditional and cultured buttermilks are produced. Buttermilk is now made by adding live lactic acid bacteria to low-fat milk (Lactococcus lactis or Lactobacillus bulgaricus). This tangy beverage is similar to the fermented dairy drink kefir.

Like kefir, yogurt, probiotics, and other products containing live bacteria cultures, buttermilk is said to provide a variety of health advantages, according to its supporters, and maybe consumed in large quantities. Beyond the fact that it has fewer calories and fat than whole milk, buttermilk may be beneficial in the prevention or alleviation of gastrointestinal ailments.

Unlike cultured buttermilk, which is popular in the US and is not a probiotic food, traditional buttermilk includes probiotics.

How many CFUs?  Buttermilk contains one billion CFUs in one gram of it. 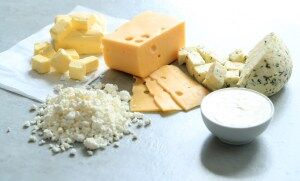 Cheeses are great carriers of probiotics because their sour taste and high-fat content protect and nourish the microbes as they pass through the gastrointestinal tract. Probiotic cheeses are either aged or prepared from raw, unpasteurized milk. Lactic acid bacteria are found in old cheeses that have not been heat treated.

How many CFUs?  Cheese has been found to contain one ten thousand CFUs in one gram.

While the majority of cheeses are fermented, this does not indicate that they all contain probiotics. That is why it is critical to check food labels for the terms “living cultures” or “active cultures.”

Many of the probiotic foods on this list are high in fiber, which feeds beneficial gut microbes. These microorganisms create short-chain fatty acids that decrease inflammation and boost the immune system. Dietary fiber is a good source of pro-and prebiotics. Read more about prebiotics here.

How much to Take? Because there is no recommended daily intake of probiotics, there is no way to determine which fermented foods to consume or in what quantities to consume them. As a result, the usual recommendation is to simply include as many fermented foods in your regular diet as possible. OR Probiotic goods containing at least “1 billion colony forming units” and probiotic bacteria Lactobacillus or Bifidobacterium.

How to Incorporate Probiotic Foods into your Diet? Some Tips

The following tips can be used to add probiotic foods to the diet in an easy way,

Fermented foods and nutritional supplements are effective strategies to increase the number of beneficial bacteria in your stomach. The NCCIH states that a large proportion of the microbes identified in probiotic foods and supplements are comparable to those found naturally in human bodies. A doctor often prescribes Probiotic supplements to treat certain conditions and are not advised for daily usage. Plus, supplements aren’t regulated by the FDA like drugs. But they are widely used by many people around the world. When it comes to consuming your probiotics, many medical professionals say that this is preferred since it may provide extra advantages associated with a healthy diet.

In any case, consult your primary care physician before starting a probiotic since some individuals with sensitive intestines (such as those with irritable bowel syndrome) may have side effects from taking too much. Additionally, as both experts advocate, maintaining an overall healthy and balanced diet is critical for enjoying the advantages of your chosen probiotic food or meal to Prime with Time!

Prebiotics and Fiber. The Best 11 Food For your Microbiome.