How do we know when it’s time to sleep or wake up in the morning? The simple answer to this question is that we all living beings, including plants, humans, and animals, have a specialized internal clock that regulates all our general sleeping, behavior, and hunger-related patterns known as circadian rhythm. While we cannot see or feel this clock, it is critical for our health and well-being.

Circadian Rhythm may be traced back to the Latin word “circa diem,” which literally translates as “about a day.”  It has been acknowledged by science for centuries, with the first documented observation of biological timekeeping in 1729 by French astronomer Jean-Jacques, who observed that the leaves of the Mimosa plant moved with a 24-hour periodicity, even though the plant was moved to complete darkness. 200 hundred years later, scientists discovered that there are certain genes that synchronize the night and dark cycles.

How Does Circadian Rhythm Work?

The circadian rhythm of your body is made up of a number of different components, all of which work together. There are four biological rhythms in the body, and this is one of them. They are made up of unique molecules (proteins) that interact with the cells throughout the body. Biological clocks are found in nearly every tissue and organ as also proven by studies. This biological rhythm is maintained by clock genes, which indicate when each process should begin. It also regulates digestion cycles, fat burning and storage, sleep patterns, and functions by assisting in the optimization of the body’s activities at various points over a 24-hour period.

Around 20% of genes switch on and off during the 24-hour cycle.

A master clock in the brain manages all of a living thing’s biological clocks, keeping them in sync. The master clock in animals, including humans, is a collection of around 20,000 nerve cells (neurons) that compose the suprachiasmatic nucleus, or SCN.

The Suprachiasmatic nucleus is positioned in the brain’s hypothalamus area and receives information directly from the eyes. They receive signals from the retina and are pigmented with a substance called melanopsin. Melanopsin’s role is to generate signals that are subsequently sent to the suprachiasmatic nucleus. This nucleus then evaluates the amount of light received by the retina, which is proportional to the duration of the day and the amount of light received. This all contributes to the release of melatonin, more often referred to as the sleep hormone. When night falls, the master clocks transmit signals to the pineal gland to create melatonin and promote sleep.

Even though the light is the main factor regulating the circadian rhythm, there are many other factors.

How Circadian Clock Is Affected by Age.

Circadian rhythms fluctuate throughout our lives, peaking throughout adolescence and then progressively reverting as we age.

Circadian cycles in a healthy individual are “in tune,” much like the several instruments in an orchestra. For instance, the body temperature begins to rise during the final hours of sleep. This occurs just prior to wakefulness. This may assist anyone in feeling more energized in the morning. At night, when sleep approaches, the body temperature decreases. The majority of individuals notice a little drop in temperature between 2 and 4 p.m. This might explain why many individuals feel sleepy in the early afternoon.

Circadian rhythm is significant because it contributes to stress reduction, longevity, and a healthy metabolism. Your health depends on maintaining your circadian rhythm. A change in your circadian cycle and lack of sleep can have both short- and long-term health repercussions. It might cause changes in biological systems like cardiovascular, skin, gastrointestinal and overall metabolism. A person is more prone to diabetes, obesity, and mental health issues.  Short-term circadian rhythm abnormalities might cause memory loss or fatigue. Injuries may also recover slower if you don’t get enough sleep. 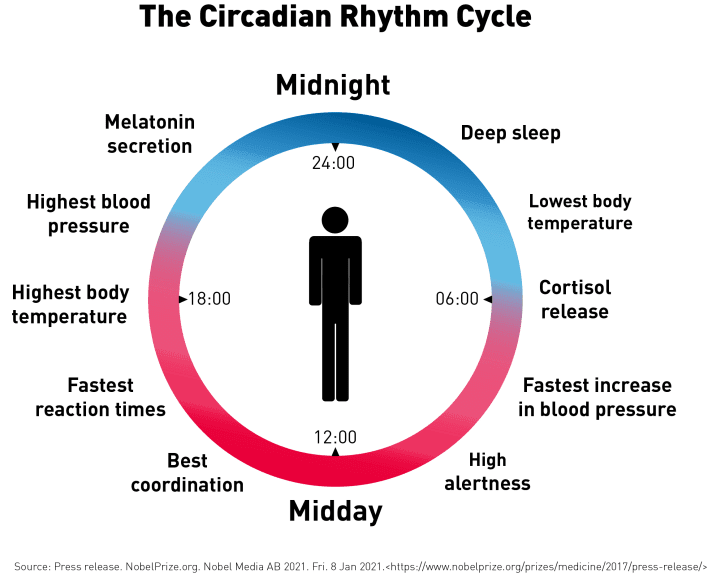 Sometimes, it is impossible to maintain your circadian rhythm because of lifestyle requirements and internal clock conflict. This can occur for a variety of reasons, including the following:

What Harm Does a Disturbed Circadian Rhythm Cause?

If you do not sleep and wake up in accordance with your circadian rhythm, you may have insomnia, excessive daytime drowsiness, and decreased productivity. The following are five common ways in which a disturbed circadian rhythm might negatively impact your overall health. 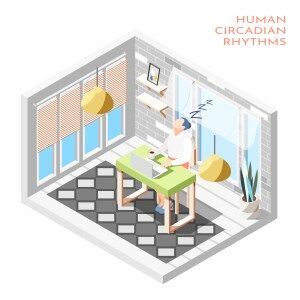 How To Fix Circadian Rhythm?

Your doctor may inquire about your sleep patterns, prescribe sleep tests, a sleep diary.  A saliva collection kit for determining dim light melatonin onset, the current gold standard for human circadian timing, is being developed and proven to check the alternations in the circadian clock.

But if there is more than 1 month of disturbed sleep despite no reason for it, other studies are implied by sleep specialists. A new method such as Epworth Sleepiness Scale is used in which a questionnaire rates responses to eight situations, on a scale of 0-3, of their associations with sleepiness. Another method is called Actigraphy. A person under observation wears a motion sensor on a non-dominant wrist for a week to measure sleep-wake cycles.

There are many evidence-based treatment regimens for the treatment of circadian rhythm:

To maintain a healthy circadian cycle, light therapy has been studied. Dr Huberman Ph.D., a neuroscientist and ophthalmologist professor at Stanford University shares in his podcast that view sunlight without sunglasses by going outside within 30-60 minutes of waking, again repeat this later in afternoon before sunset. You don’t need to view the sun directly, just gaze around. On clear, cloudless days, spend 10 minutes viewing the morning and afternoon sun; on cloudy days, spend 20 minutes; and on really overcast days, spend 30-60 minutes. Consider an artificial daytime simulator source if you reside in an area with extremely little light.

Dr. Huberman also shared that wearing blue light blocking glasses is not advised during the day time and may be considered to mitigate the screen light’s effect on melatonin before bed.

Light treatment involves exposing your eyes to bright but safe levels of light for a predetermined and consistent duration of time. In many parts of the world, sunlight is not accessible at the optimal time for therapy. Artificial light may be used in the same manner as sunlight does, except that human are frequently exposed to artificial light during periods of darkness. There are many types of therapies available such as light boxes, dawn stimulators, light visors and desk lamps serving the same purpose.

It has been studied that exposing your eyes to sunlight-like light, light therapy assists in re-aligning your circadian cycle with the sun’s rhythms. As a result, individuals feel more fatigued when the sun sets in the evening and more awake as the sun rises in the morning. 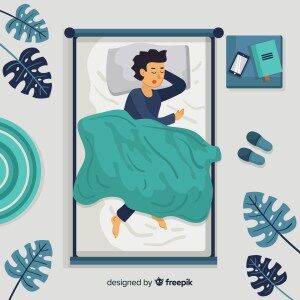 The most effective strategy to resolve circadian dysregulation is to reset your internal clock through improved sleep hygiene. Maintaining a consistent sleep routine helps reset your circadian cycle. By sleeping and waking at the same time each day, your body will become accustomed to the new schedule. Limit daytime naps to less than 90 minutes, or avoid them altogether. Turn off television and other screens such as tablets, cellphones minimum an hour before bed. According to studies, these gadgets may disrupt sleep by reducing melatonin synthesis leading to neurophysiologic arousals that raise alertness when you should be relaxing. 1 hour before your usual bedtime, you should expect to feel quite awake. This is a naturally occurring increase in wakefulness noted by sleep researchers. Learn more efficient and well researched methods in our article here.

It is also recommended in research to regulate your food timings. Eat your heaviest meal first thing in the morning when digestive juices are at their peak. Avoid caffeine-containing drinks 3 hours before bedtime. Reduce alcohol consumption at night since it impairs sleep quality. Avoid indigestion by stopping eating at least three hours before bed. Eating an early dinner and avoiding eating until the next morning’s breakfast is beneficial to regulate the rhythm. Once your sleep is restored, maintain constant breakfast and dinner schedules to aid in the maintenance of stable circadian rhythms, with approximately 12 hours between breakfast and supper.

Between the hours of 10 p.m. and 4 a.m., avoid seeing bright lights. Dim lights 1-2 hours before sleeping. It is suggested that you use only as much artificial illumination as necessary to ensure your safety while being awake. Yellow and orange light have minimal influence on the circadian clock so they are recommended. At night, blue blockers can assist a little but will still dull the lights. Viewing strong lights of all hues disrupts your circadian rhythm. The lux unit measures light intensity. Normal indoor light levels of 100 lux or above have been demonstrated to decrease melatonin synthesis and disrupt sleep-wake cycles.

5. Use Night Time Mode in Gadgets.

Numerous smartphones, tablets, and other portable electronic gadgets include a “nighttime mode” that reduces strain on the eyes before bed. According to one research, the most efficient evening modes limit blue light emissions and dim the display. If your smartphone does not automatically reduce the brightness in night mode, you should decrease the display manually.

When adjusting your bedtime and/or wake time, try progressing in 15-minute increments toward your desired time. The body adapts more readily to gradual changes in your sleep regimen than it does to abrupt alterations. For instance, if you typically sleep at 1 a.m. and wake up at 9 a.m., commit to sleeping at 12:30 a.m. and getting up at 8:30 a.m. for a week, and then revert to those periods another half-hour the following week.

It has been suggested that physical activity can alter circadian timing. Exercise and sleep are in some ways synergistic. Proper exercise may increase the quality and quality of sleep, while a healthy sleep-wake cycle guarantees that you work out with greater power and endurance. Exercise, on the other hand, might be stimulating if performed too close to bedtime.

If you’re having difficulty sleeping at night and want to reset your circadian rhythm, consider introducing regular exercise into your regimen. However, like with everything connected to the circadian rhythm, timing is essential, so avoid exercising within 1-2 hours of going to bed. If you exercise later in the day, choose low- or moderate-intensity routines that are less exciting, and be careful to cool down at the end. According to Sleep Foundation, most experts recommend at least 150 minutes of exercise each week4, which should be 30 minutes per day, five days a week.

Melatonin can be recommended at very low dosages (0.5 mg) and supplements should be taken a few hours before night under the prescription of a sleep specialist. Always consult with your physician before beginning any supplement regimen. Over-the-counter melatonin pills may help ease jet lag and sleep-onset insomnia in senior melatonin deficient patients. The FDA hasn’t authorized them, so it’s unclear how much melatonin is safe. However, Dr. Huberman suggests in his podcast to take the following,

It is critical for good sleep to maintain a regular circadian cycle. If excessive daytime sleepiness impairs your everyday activities, and the above-mentioned methods are not working you may have a sleep problem. It is suggested to contact your healthcare provider and schedule an appointment to have a clear picture of your condition.

A Cut Above Blood Glucose. How Do We Have Optimal Levels?

A Cut Above Blood Glucose. How Do We Have Optimal Levels?