Flowers create perfumes to attract pollinators and promote reproduction, while many species of insects, fish, and mammals release unique aromas to attract mates. Humans, too, emit various odors, which are chemicals that carry a scent. Many of these are essential for normal biological function, and not all of them are pleasant. Here in this article, we will discuss certain body odors their development as well as also what it tells about our general health.

Most people associate body odor with sweat, and no doubt, it’s an important piece of the puzzle, but it is not a direct cause. The reason lies like there are many types of sweat glands on the body; the odor is produced when perspiration comes into interaction with bacteria on the skin, breaking down protein molecules in perspiration releasing odor. But bacteria aren’t the only culprits. Body odor is also related to sweat gland type. Humans have three distinct sweat glands: apocrine, eccrine, and sebaceous. While eccrine sweat glands are found on all skin types, apocrine and sebaceous sweat glands are found only in certain areas.

The amount of sweat you produce does not always affect your body’s odor. That is why an individual might have an unpleasant body odor but not be perspiring. On the other hand, a person might sweat profusely without smelling. This is because body odor is caused by the bacteria that live on your skin and how they interact with perspiration, not by the sweat itself.

Odor is most likely to occur in the following areas of the body.

Your body odor might alter over time. Consider a newborn infant – they have a definite, fresh aroma. And then consider an adolescent female. She, too, has a particular aroma that is quite unlike that of a baby. This is because, until adolescence, the apocrine glands are dormant and inactive. They begin to generate sweat as they reach puberty as proven by research. It is only at this point that body odor becomes a concern.

Aging-related changes in body odor have nothing to do with personal hygiene. Experts believe it’s caused by odor molecules and microorganisms on the skin. The main odor component is 2-nonenal. 2-nonenal is a result of a chemical breakdown in the body of unsaturated fatty acids. Experts only found 2-nonenal in adults over 40. Levels seem to rise with age.

Numerous variables, including gender, heredity, age, and food, can affect the sort of odor an individual produces. Some of the factors are discussed below,

What diseases might result in unpleasant body odor? Apart from cleanliness and hygiene, various illnesses or medical problems might affect a person’s odor as has been proven by research. The following are some of the most common medical diseases that contribute to body odor. 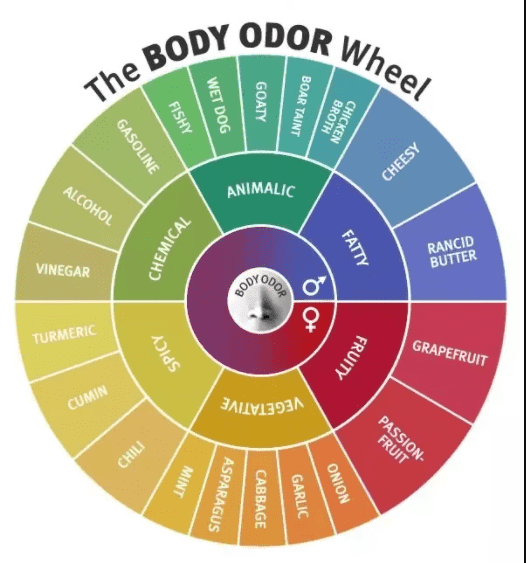 Do men and women have different odors? When the differences between the men’s and women’s body odors were studied, it was reported that men’s body scents are often more pungent than women’s due to more hair, genetic differences in the skin of both genders. It was also studied that men often have a higher concentration of ‘corynebacterial’ – the odorous bacteria – in their armpits than women. Both genders have the same type of compounds and bacteria in the sweat that produces odor but the former is the cheesy scent found in male armpits, whereas the latter is oniony.

But who is more sensitive to smell? Apparently, women have more cells in the olfactory bulb, which is the portion of the brain that is dedicated to the sense of smell, than males, according to new research. Female brains contained an average of 43% more cells and almost 50% more neurons in their olfactory centers making them better sniffers than men.

What about Pheromones? Pheromones are the chemicals that are emitted by living beings outside the body that elicit behavior in other people, such as sexual desire. They are found in biological fluids such as urine, sperm or vaginal secretions, breast milk, and maybe even saliva and breath in humans, however, the majority of attention has been focused on axillary sweat. They can elicit arousal, desire, lust, and even fertility when released. The primary distinction between male and female pheromones is that men create Androstenol which is found only in 10% of men, while females produce Copulin and Estratetraenol which are more abundant than males. In this case, too, women are reported to be more sensitive to pheromones than men.

How To Reduce Body Odor

Although there is no universal cure for it, the following actions may assist in controlling body odor:

The first step in personal hygiene is taking a bath and cleaning up the body. By taking regular baths or showers, one can wash away sweat and microorganisms that cause odor. Make ensure you use antibacterial soap, since they are specifically formulated and proven to eliminate odor-causing bacteria. Take the time to properly wash sweat-prone parts of the body, such as the underarms and feet. Finish by completely drying your skin to prevent bacteria from growing. Shower daily if you live in an extremely hot or humid location. Additionally, one may use a washcloth to cleanse your armpits, groin, and skin folds. Shower soon following exercise or sweating.

Hair in regions such as the armpits can impede the outflow of perspiration, allowing bacteria more time to break down proteins and produce odorants. Shaving can aid in the regulation of body odor in that region. Reusable razors, laser treatments, epilators, waxing and hair removing creams and lotions are available in the market to ease out this process. 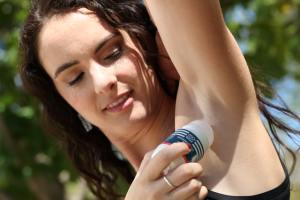 Underarm products are classified into two categories: deodorants and antiperspirants. Deodorants make your underarms less bacteria-friendly. Additionally, they aid in masking body odor through the use of scent. Antiperspirants work by inhibiting sweat glands, hence reducing perspiration. If you do not perspire much but still have body odor, deodorants are an excellent alternative. If you perspire excessively, search for an antiperspirant that doubles as a deodorant. Both of these products can help lower the severity of a person’s body odor by adjusting the volume of sweat produced and the quantity and activity of odor-causing bacteria.

Numerous deodorants and antiperspirants also contain antimicrobials such as propylene glycol, triclosan, and benzalkonium chloride, which reduce bacterial abundance and modify the skin microbiome in the armpits. After washing or bathing and before sleeping, apply antiperspirant. On achieve the optimum effects, apply antiperspirants to dry skin. If you are unable to select a product that is a good fit for you, see your physician.

The type of clothes you wear can also have an impact on how much sweat you produce while going about your everyday activities. Choosing materials that are more breathable than other types of fabric (such as cotton) will allow more air to enter your garments and prevent sweat from accumulating.

When it comes to training apparel, synthetic materials that wick away moisture are the ideal choice since they may be able to keep perspiration off your skin. Recent research proves that expensive gym clothing and other man-made textiles such as polyester and spandex are a breeding ground for germs. When you sweat less, microorganisms on your skin have a harder time growing and multiplying, which contributes to body odor. Additionally, remember to change your socks, preferably antibacterial socks, and wear breathable training shoes to avoid foot odor!

Some food items might contribute to the development of body odor. Minimize items that are very pungent from your diet or keep an eye out for meals that exacerbate your body odor. Garlic, onions, and alcohol are just a few foods that might contribute to an unpleasant odor in your sweating. If you consume these items on a regular basis, consider eating fewer of them.

Bacteria may readily gather and thrive on used clothing, and a foul odor might adhere if the garments are not thoroughly laundered. Regularly wash your clothes to prevent the dreadful stench caused by odor-causing microorganisms from sticking. Don’t use a dryer to dry clothes, to achieve the best results, try air-drying or line-drying your garments.

If a person’s body odor impairs their quality of life and home remedies are ineffective, a doctor may suggest further treatment. These may include the following:

Topical Antibiotics. Both topical and oral antibiotics can help get rid of bacteria on the surface of the skin. Topical antibiotics, like clindamycin, erythromycin, and benzoyl peroxide, as well as antiseptic soaps, may help people by cutting down on the growth of bacteria that break down apocrine secretions, releasing fatty acids that smell bad. Any kind of antibiotics can adversely affect the microbiome – check out this article to learn more about microbiome and their latest discovered importance.

Botulinum Toxin (Botox). Botox therapy may be recommended by a medical expert for those who sweat excessively. They may inject Botox directly into the skin, which inhibits the production of chemicals associated with sweating. According to some studies, Botox injections in the armpits can significantly reduce perspiration by 82–87 %. Though it’s not a permanent solution, several sittings are required to get optimum results.

Laser Treatment. It is probable that laser hair removal will not only eliminate the hair itself, but it may also assist to avoid the development of undesirable body odor.

Surgery. An endoscopic thoracic sympathectomy (ETS) is a surgical treatment used to treat excessive body odor when non-pharmacological and self-care approaches fail to alleviate the condition. The sweat-controlling nerves beneath the skin of the armpits are destroyed as a result of this procedure. If you choose this method as a last resort, be aware that you run the danger of harming other nerves and arteries in the surrounding area. However, according to a 2019 assessment, more than 90% of persons who received ETS reported an improvement in their overall quality of life following the surgery.

Everybody perspires. Sweating is totally natural whether engaging in physical activity, strolling in the sun, or being in a warm place. Sweating is the body’s natural method of temperature regulation. However, the foul odor accompanying perspiration can be quite unpleasant, especially when surrounded by friends and loved ones. Follow the above-given proven methods to reduce the amount of body odor and stay fresh all day! If you feel any unusual changes in their body dour or the amount of perspiration produced, they should seek medical attention as soon as possible.