Rheumatoid arthritis is a condition that can cause pain, swelling, and stiffness in joints.  But it can also affect other body parts. This is referred to as an auto-immune disorder. This implies that the immune system, which serves as the body’s natural defense mechanism, becomes confused and attacks healthy tissues. In rheumatoid arthritis, this is accomplished mainly by joint inflammation. Unlike osteoarthritis, which is caused by normal wear and tear, rheumatoid arthritis attacks the lining of your joints, creating a painful swelling that can progress to bone erosion and joint deformity.

Symptoms of rheumatoid include, 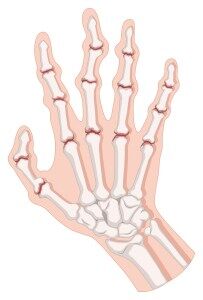 RA may have a detrimental effect on more than just your joints. Organs, blood vessels, and bones can all become involved in complications. It can also affect different organs like the heart, lungs, skin, cartilages, eyes, bones, muscles, nerves, etc.  The condition typically begins progressively, with symptoms appearing and disappearing over months or even years. Severe symptoms, on the other hand, can strike people rather suddenly. The earlier RA is detected and treated, the better it will be the prognosis.

The following factors may have a role in the development of rheumatoid arthritis:

It’s natural for individuals living with a chronic disease to feel melancholy or upset about their health on occasion. Thus, rheumatoid arthritis sufferers are twice as prone to experience depression as the general population. Depression not only adds to the burden of RA patients but also influences how they view and manage their physical condition, as well as their interactions with their rheumatologist and general practitioner. Thus, depression exacerbates the burden of rheumatoid arthritis on both the patient and society. Following are some evidence-based effects of RA;

Research shows that persons with rheumatoid arthritis have considerably different personalities than normal and normal people, that the differences become more pronounced with chronicity in the rheumatic process, and that the differences evolve as a result of arthritis. Another recent research on autoimmune patients, depressed personality is prevalent among people who have rheumatoid arthritis. Also, it was discovered that such people are more empathic towards others despite being less sympathetic to themselves.  Patients with depressed personalities may also reject the ongoing treatment of RA, making it more difficult to treat them.

The vicious cycle of pain, poor health, and depression can have a profound effect on the development and treatment of arthritis. Numerous studies have established unequivocally that patients with the most severe forms of arthritis are the most prone to be anxious or sad. (1) (2).

Mental health is a broad term that includes both emotional and psychological well-being. Rheumatoid arthritis (RA) manifests itself physically in a variety of ways. However, people living with RA may also face mental health problems resulting from the disorder.

While scientists are still unsure of the exact nature of the association between rheumatoid arthritis and mental health, a recent study provides some new information. The precise inflammatory pathways that cause rheumatoid arthritis are also connected with depression in some cases. In those who suffer from depression, the levels of C-reactive protein (CRP), which is one of the markers of inflammation used by researchers, are typically high. According to a 2018 study, CRP levels may be much higher in those who suffer from difficult-to-treat depression than in healthy people.

Anxiety and depression are two of the most frequent mental conditions among RA patients. A 2017 Rheumatology and Therapy research revealed that 30% of RA patients develop depression within five years of diagnosis. 30% of individuals experience depression. Anxiety affects roughly 20% of people with RA, according to 2017 British Journal of General Practice research. That research also found a greater rate of depression, at 39%.

It has also been studied that RA pain can exacerbate depression, making it difficult to control RA symptoms.

According to 2018 research, there is a correlation between this inflammation and alterations in the patterns of brain connections in aging.  According to the findings of the study, these brain alterations are related to exhaustion, discomfort, and a diminished capacity to think all of them contributing to the development of brain fog. According to another study, patients with significant cognitive loss as a result of RA might experience issues speaking, coupled with other symptoms such as difficulty with concentration or memory.

Having RA might place a strain on one’s social life from time to time.  That is why social interactions might be strained by rheumatoid arthritis at times. Individuals might get irritated, angry, and sad as a result of pain and loss of independence, which can influence other family members. The research did in this aspect also come to the conclusion that people suffering from RA might feel lower than healthy individuals in many social aspects.

How To Manage Depression in Rheumatoid Arthritis?

Thus, the National Institute for Health and Care Excellence (NICE) recommendation for the therapy of rheumatoid arthritis (RA) in the United Kingdom includes psychological therapies for tiredness, poor mood, and social well-being. Such as,

When pain or stiff joints disrupt sleep, fatigue may set in throughout the day. Exercise, drinking enough water, eating a balanced diet, managing stress, taking care of one’s mental health, and resting when necessary are all effective ways for minimizing fatigue. If these measures are insufficient, your doctor may recommend additional drugs to treat anemia, aid in sleep, or boost your energy levels (e.g., antidepressants). When the symptoms flare, you must maintain a healthy pace and take breaks throughout the day.

Keeping a record of your symptoms may assist you in determining whether or not your condition is progressing. You can use pen and paper or apps to keep track of when and how long you experience symptoms, their intensity, and what causes them to worsen or improve. Keep your symptoms diary with you at all times when you visit your doctor or rheumatologist.

Being physically active is especially beneficial for people who have RA. According to a study, it relieves pain, improves mood, reduces tension, and aids in the preservation of joint mobility. Exercise, according to 2014 research, may help enhance sleep quality and exhaustion in persons with rheumatoid arthritis.  There are three types of exercise one can utilize to reduce the RA associated pain,

It is recommended to consult your physiotherapist for a proper exercise regimen according to the joints involved. To get an idea about what exercises to do, check out this article.

Taking time out of your day to pause, relax, breathe, and concentrate may help you better manage the pain and stress associated with RA, according to research. According to a study of four research published in February 2021 in the journal Research, Society, and Development, patients with rheumatoid arthritis who acquired mindfulness had lower levels of sadness, stress, and disease activity than those who did not learn mindfulness.

Additionally, one might use guided imagery. Consider peaceful locations or circumstances in your imagination. Utilize all of your senses and visualize yourself seeing, smelling, and experiencing it.

A good night’s sleep is crucial for everyone, but it is especially critical for those who have RA. According to a 2018 study, poor sleep quality has an impact on your amount of discomfort as well as your capacity to move. Also, 2019 research claims that sleep deprivation causes particular pain regions in the brain to become more active and reactive than they would be following a good night’s sleep. Each night, seek to get at least 8 hours of sleep. If you’re not getting enough sleep at night, having an afternoon nap may also help. If possible, avoid bringing work home from the workplace. At least an hour before bedtime, turn off the television, internet, and phone. 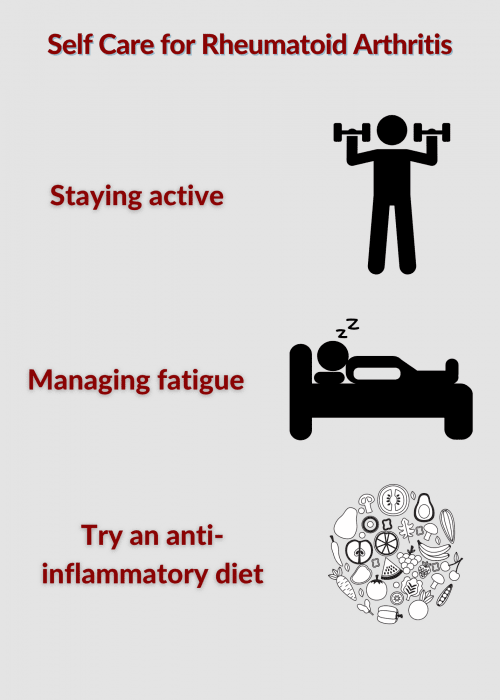 According to 2017 research, 24% of persons with RA said that their diet had an impact on their symptoms. So which diet is better for rheumatoid arthritis?

According to the Arthritis Foundation, a diet high in vegetables, fruits, nuts, legumes, and seafood is beneficial for rheumatoid arthritis. Additionally, the Academy of Nutrition and Dietetics recommends including sources of omega-3 fatty acids, which can be found in fish oil and walnuts; whole grains such as brown rice; lean proteins such as chicken; and a variety of spices (particularly ginger and curry) — all while limiting alcohol consumption. Another research recommended foods that were high in antioxidants and anti-inflammatory characteristics that may be beneficial in slowing the course of RA and reducing joint damage, such as the ones listed below:

RA symptoms and flare-ups don’t allow the sufferer to do fast-paced exercises. So Tai chi is a Chinese martial art that mixes slow, gentle motions with mindfulness and deep breathing to create a powerful and effective combination. It is good for the mind, the body, and the spirit. According to 2013 research, joining group tai chi lessons can help people with RA feel less anxious and gain more social support.

Along with Tai Chi, yoga may also help to lower RA pain and inflammation while also improving the overall quality of life according to a 2017 scientific review. According to 2013 research doing yoga for six weeks improved mood, exhaustion, and acceptance of chronic pain in young women with rheumatoid arthritis. These enhancements were still obvious two months later.

Take instruction from a skilled instructor and avoid movements that aggravate your discomfort.

Some patients with RA choose to smoke in order to cope with the stress of their disease, but this is not a smart move. Studies have indicated that smoking can make rheumatoid arthritis worse and make the medication less effective. Learn more methods to quit smoking and improve your overall health and RA-related symptoms in this article. 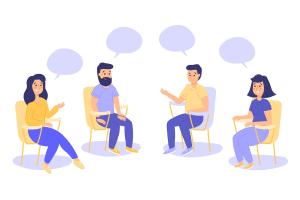 Having the opportunity to express one’s feelings and learn about other people’s experiences may be quite comforting. A 2015 study revealed that attending a monthly social support group increased the quality of life for patients with RA. It also boosted their understanding of the illness and their confidence in handling it. Online forums and groups may also be beneficial. Several members of a support group on Facebook exchanged information with one another and expressed gratitude for the online social assistance, according to research published in the year 2020.

If your depression does not improve, speak with your physician during your routine appointment. Your physician may prescribe antidepressants or send you to a specialist in mental health.