You might have seen a rounded lump on the surface of your skin or any other person. It sometimes itches but usually doesn’t. You’ll be able to see them when you view your reflection in a mirror or feel them when you rub against them while wearing certain pieces of clothing or resting an object on your body. We call it an external cyst.  What are they, what causes them, and how can you treat cysts are all covered in the article.

Cysts on skin can usually form due to the blocking of pores or other body fluids. Infections, stress, and chronic inflammation can all play a role in developing cysts. The size and shape of a suspected cyst will be evaluated, as well as any signs of redness or pain, during a physical exam performed by your doctor. This kind of superficial examination is usually sufficient.

Depending on the type of cyst and its location, it can cause various symptoms. We’ve compiled a list of regionally prevalent symptoms:

Cysts on skin are normally tiny and harmless, but some can develop to the size of a golf ball. Unless they are ruptured or irritated, they are painless. The affected area will be irritated, sensitive, and red. Epidermoid cysts and sebaceous cysts are the two most common subcutaneous cysts. Both are often lumpy, smooth, fleshy, or pale yellow. The scalp, the back of the neck, and the upper back are common locations, but they can grow anywhere on the skin. Some common cysts on the skin are mentioned below,

Other types of cysts on the surface of the skin are,

Many people mistake pilomatrixoma for dermoid or epidermoid cysts, which are also benign skin growths. A doctor may perform a skin biopsy to confirm the diagnosis of a pilomatrixoma. You will likely be advised to have surgery to remove the pilomatrixoma, as these tumors do not often return after the first removal.

Just like other body parts, our eyes are also one to develop cysts. The most common ones are,

A chalazion may usually be treated at home with minimal discomfort. A month is the average time it takes for a chalazion to disappear.  One should never try to pop a chalazion as the risk of eye damage exists. Other methods recommended by doctors are mentioned in this article.  One should consult an eye doctor if the chalazion doesn’t clear up. It may be necessary to make a little incision in the chalazion and drain the fluid. 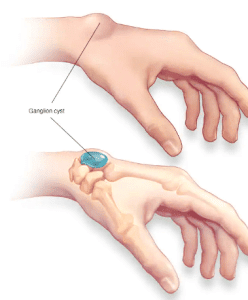 Ganglion cysts often grow on the hands and wrists but can also occur on the fingers and toes and form near joints. To put it another way, these cysts form when “extra joint fluid” collects in a saclike structure adjacent to the joint, generally due to a small injury. They can be either stiff and rubbery or soft and rubbery. They can appear at any age, but young adult women (ages 20-40) are most vulnerable.

Ganglion cysts affect many people, with an annual incidence rate of 55 per 100,000. Ganglia are among the most frequent benign (noncancerous) masses in the body’s soft tissues. The bump is often between a quarter and an inch (usually 2-5cm) and appears on the hands, knees, or feet; it comes and goes; most cases are uncomfortable, and the discomfort is increased by motion.

Unless they are pushing on a nerve, they rarely cause discomfort but can cause irritation or a decrease in grip strength in certain people. These cysts often don’t need treatment, and research indicates that 58% of cysts will go away on their own. Unless they become large or painful. However, non-surgical options exist for treatment discussed later in the article. And after treatment, the recurrence rate may be as low as 1%. 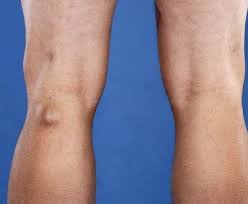 When joint fluid gathers below the knee, it forms a pouch known as a Baker’s cyst or a popliteal cyst.  Because of its proximity to the knee, this cyst may make the joint seem bloated or restricted. Baker’s cysts are typically associated with a knee injury or osteoarthritis. As women are more likely to develop osteoarthritis and rheumatoid arthritis, both of which can lead to the formation of Baker’s cysts and are more commonly seen in those over 40.

Baker’s cysts can cause the knee to feel like a hard-boiled egg when the person bends the knee. Joint swelling and tightness around the knee are possible symptoms. Pain behind the knee or farther down the leg may indicate a cyst rupture. Swelling of the lower extremities may occur if a cyst becomes large enough.

It’s possible that a Baker’s cyst will disappear on its own, and it’s not harmful. However, occasionally they break, leading to discomfort, edema, and redness in the calf below due to the leakage of synovial fluid. These signs and symptoms are very similar to deep vein thrombosis (DVT), a life-threatening illness that calls for immediate medical attention due to the risk of complications. Reason enough to investigate the issue immediately. Nonetheless, there are measures you may take at home to alleviate discomfort:

Visit a medical professional immediately if you notice any changes in the color or size of your lower leg. It may be a possibility that your Baker’s cyst may have ruptured.

It is a slow-growing, painless, soft-tissue lump with a rubbery consistency that commonly occurs in people over 40.  However, they can grow at any age. It can appear anywhere on the body, including the shoulders, neck, stomach, chest, and back, and it can be seen alone or in clusters and is often little more than 2 inches in size.

Lipomas are extremely prevalent. 1,000 individuals are diagnosed with a lipoma at some point. The root of the problem that causes lipomas is still a mystery. Multiple lipomas in a single individual may have a hereditary basis. Fewer than 3 % with lipomas have a personal history of the disease.

Lipomas are hereditary, as are many of the disorders that produce them. Since they are transmitted via families, they cannot be prevented. And it’s still up for debate amongst specialists as to whether or not to consider it cancerous. Some types of lipomas include,

It’s possible you won’t have to undergo any sort of medical intervention. But it might become an important visit to the hospital if anyone seems to be experiencing rapid expansion of their lipoma. The discomfort is intensifying. Or a nerve is being compressed, leading to altered or absent sensations in the area.

If you have a lump or swelling that doesn’t go away, it’s best to see a doctor.

Such cysts don’t not only look aesthetically unpleasant but may also cause a reduction in usual body movements with associated pains. But they aren’t confined to external places like skin. They can also be found inside the body. Read this article to get complete information on how to treat them.

An unexplained cyst can cause a lot of stress and discomfort. Fortunately, many cysts are quite frequent, harmless, and easily treatable. The following methods have been incorporated by doctors and are proven by research.

A cyst that is not painful or otherwise bothersome will go away on its own. It may be lessened by placing a warm compress on the cyst for 10 to 15 minutes daily. Slowly draining the cyst in this way can help reduce inflammation as well. If the cyst begins to flow or drain, you should refrain from touching or squeezing it. Touching an open cyst increases the possibility that bacteria will enter it and cause an infection.

Through a tiny needle, a doctor will inject the cyst or the area around it with the anti-inflammatory medicine corticosteroid. The procedure itself takes very little time and generates very little discomfort. After receiving the injection, the size of the lump should decrease.

Doctors can also drain cysts with the help of a sterile needle and syringe. Patients are warned against trying this independently due to the risks of aggravating inflammation, introducing infection, and creating scar tissue. There is no guarantee that the cyst won’t return after it has been drained and the contents removed.

The final resort in getting rid of a cyst is having surgery to remove its wall of tissue. A patient may desire a cyst removed for medical or aesthetic reasons. Surgical excision is the most effective method of removing a cyst.  A clinician normally avoids excision when the cyst presents symptoms of inflammation and infection. They normally wait a minimum of 4–6 weeks for the inflammation to subside before cutting the cyst.

After your doctor has removed the cyst, you will most likely have a scar. It’s possible to have an infection, so your doctor may prescribe an antibiotic ointment for you to use following the surgery.

There are certain cysts that may require additional or alternative treatments,

The following table summarizes the research-based methods of removing the cysts mentioned above on skin.

Cysts on skin are usually not a symptom of anything wrong with your health, although they can be annoying. Depending on their placement, they may also make a person feel self-conscious. Though at-home treatment of an inflammatory cyst may help alleviate some of the associated discomforts, getting to the bottom of the problem may require a doctor’s visit. A medical professional must remove the cyst to prevent its recurrence. It is always recommended to those with skin issues should see a dermatologist for diagnosis and treatment.

Family. Formula of Forming a Positive Relationship with Family.

Surprising Importance of Enzymes For The Body.

Family. Formula of Forming a Positive Relationship with Family.

Surprising Importance of Enzymes For The Body.

The Top 5 Internal Cysts & Thier Research Based Treatments.