Once diagnosed with a condition that has the potential to change your life, you will want to obtain as much information about it as possible. One such condition prevalent in women is PCOS.

PCOS is a condition in which the ovaries create an inordinate quantity of androgens, male sex hormones that are typically present in tiny quantities in women. The ovaries of most women with polycystic ovary syndrome develop a number of little cysts filled with fluid that are up to 8mm (approximately 0.3in) in size. Although the cysts themselves have little or no health risks, they can cause hormonal disruption. Nevertheless, some women with this condition do not produce cysts, and some women without this disorder do.

PCOS affects an estimated 5%-10% of reproductive-aged women in the United States. Among women of childbearing age, this is one of the most frequent hormonal endocrine diseases, affecting over 5 million women. However, it can impact a far higher percentage of women in some high-risk populations, such as Native American, Asian, North African, and Caucasian European women.

To have a better understanding of what this condition is, visualize your ovaries as little clusters of planted grapes. The grape seed represents an immature egg cell, while the fruit’s flesh represents the follicle, which is loaded with fluid. The immature eggs are contained in what resemble tiny sacs. When some of these sacs are unable to release an egg, a condition known as polycystic ovary syndrome.

The hormones involved in reproduction are inadequate in people with PCOS. Hormonal factors in polycystic ovary syndrome include,

The ovaries may have issues as a result, and you may miss your period or not get it at all. Some have an impact on your menstrual cycle and your ability to birth.

Is PCOS the same as ovarian cysts? The primary distinction between PCOS and ovarian cysts lies in the fact that PCOS causes a major hormonal imbalance. The presence of Polycysts is not required for a woman to have numerous ovarian cysts. What are exactly ovarian cysts? Learn from this article.

Each woman with polycystic ovary syndrome will experience a unique set of symptoms and presentation of the condition. Making a diagnosis can be challenging due to the fact that there are no ‘typical’ symptoms of PCOS. The Rotterdam criteria are the most widely utilized set of criteria for diagnosing and understanding PCOS among medical practitioners.

Other symptoms include the following, 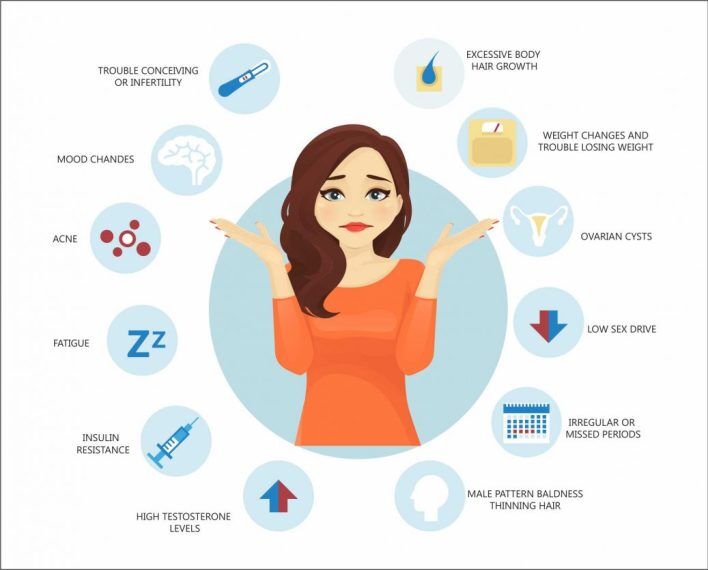 Laboratory, clinical, and ultrasound results are typically needed to establish the diagnosis of PCOS because of the wide variation in the symptoms. Your doctor will first review your medical history, family history, symptoms, medications, and medical conditions. He may also ask about menstruation cycles and weight changes. Also, these tests are usually incorporated to diagnose along with Rotterdam criteria,

PCOS might have serious consequences in the long run if it is not recognized and treated early. The risks of developing cardiovascular disease, diabetes, and obesity may all increase as a result.

Women with PCOS have an increased risk of getting a variety of life-threatening complications. Recent research indicates:

Those with polycystic ovary syndrome have a higher risk of having a preterm birth than women without PCOS. In addition, they are more likely to experience complications including preterm birth, hypertension, and diabetes during pregnancy. With the help of fertility medicines that stimulate ovulation, however, women with PCOS can conceive. Pregnancy outcomes can be improved by losing weight and controlling diabetes.

Until recently, the emphasis on PCOS has been during reproductive life since it has been predominantly seen as a reproductive condition. Questions concerning what occurs as women with PCOS age have received relatively little attention. For example, does the condition become worse, and if so, how worse? Sex hormones improve with age, but they’re still different in women with this condition.

Age’s Impact on Fertility Hormones. PCOS has only lately been studied in women beyond their reproductive years. It has been studied in a 21-year follow-up study that normal declines in testosterone occur with age in both women with and without PCOS. Also, the older women with PCOS reported fewer hot flashes and less sweating than their non-PCOS counterparts, they did report much higher rates of hirsutism (64% vs. 9%). Based on these findings, the researchers concluded that women with PCOS experience different reproductive hormones and experience menopause at a later age compared to those without the condition.

Age-Related Changes in PCOS Women’s Weight and Height. During the 21-year research, women with PCOS were less likely to have weight changes. As women with PCOS aged, their waist circumference and BMI increased, possibly due to fat redistribution.

Age-Related Metabolic Adjustments. We know that women with PCOS have increased insulin levels regardless of weight. It seems to remain the same after menopause, insulin and other metabolic and inflammatory indicators tend to remain and deteriorate, especially in overweight women. This means that they have an increased chance of developing diabetes type 2, cardiovascular disease, and metabolic syndrome over their lifetimes according to a study. But it’s not true in the case of lean women as insulin resistance rises with age in obese women, but not in lean and overweight PCOS patients, according to evidence from 1345 female patients.

Priorities of treatment should include restoring regular ovulation, preventing androgen impact on tissues of concern, and lowering insulin resistance. While it is possible for women to manage their symptoms solely with medication, hormone therapy, or even surgery. There are many evidence-based methods of alternative medicine that have been shown to be effective. Which are also discussed below, 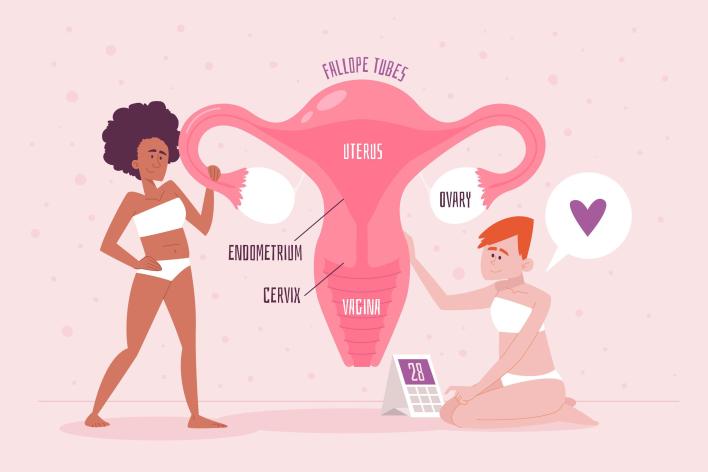 Oral contraceptives have also been linked to an increased risk of obesity, type 2 diabetes, heart disease, or blood clots, and may exacerbate existing PCOS symptoms. That is why oral contraceptives should only be offered to high-risk populations including those at risk for chronic conditions, older individuals, or persons with diabetes or hypertension.

2. Weight Loss. Obesity is a prevalent feature of polycystic ovary syndrome, which is associated with an increased risk of diabetes, cardiovascular disease, and other conditions related to metabolic syndrome. Weight loss for obese patients with PCOS is advantageous in several ways. Losing 5 to 10% of your body weight (approximately 9 to 18 pounds if you weigh 180) might make your body more insulin sensitive (thereby reducing the insulin resistance behind PCOS. Androgen, luteinizing hormone (LH), and insulin concentrations are decreased by weight reduction. Additionally, it regulates ovulation, increasing the likelihood of conception.

3. Exercise. It has been studied that women with PCOS who have been sedentary for a while and commit to exercising for just three hours per week will see an improvement in their insulin sensitivity. Women in this research modified their workouts to include interval training (brief intervals of intense exercise followed by less intense recovery periods).

4. Lessen the Caffeine. Caffeine use may affect estrogen levels and hormonal behavior, according to a source. That is why women with PCOS are advised to use decaffeinated beverages like kombucha and herbal tea. Even green tea has been demonstrated to reduce insulin resistance.

5. Caloric Intake Timing. One study has indicated that calorie intake timing has a big impact on glucose, insulin, and testosterone levels. Lowering the insulin could potentially help with infertility issues. It has been seen that women who had the majority of their daily calories at tier breakfast for 12 weeks, significantly improved their insulin and glucose levels as well as lowered levels of testosterone up to 50%. The suggested calorie division was a 980 calories breakfast, 640-calorie lunch, and 90-calorie dinner.

6. Reduce AGEs. As PCOS women have been found to have high levels of AGEs (Advanced Glycation End Products), one small study found that cutting down on dietary AGEs significantly reduced insulin levels in women with PCOs. These foods include animal-derived and processed foods. Avoiding such foods and turning towards more healthy diets including raw veggies, minimally fired, and nutritional foods which help to control hormones and insulin levels.

7. Vitamins & Calcium Intake. It has been seen in another study that 100 infertile women who were given vitamins and minerals (1000 calcium and 100,000 of Vitamin D for 6 months) along with other medication saw improvement in their BMI, menstrual abnormalities, and other symptoms. These supplements not only help with PCOS but are also beneficial for heart, bone, brain, and muscle health.

8. Magnesium. Some research indicates that dietary intake of magnesium has been found beneficial and may improve insulin sensitivity.  Another study found that overweight, insulin-resistant subjects who were supplemented with 300mg of magnesium at bedtime showed significant improvement in fasting blood glucose levels compared to those who received nothing.

9. Chromium. Research suggests that chromium supplements can help people with Diabetes by lowering their blood glucose levels. One such study examined the role of chromium in PCOS women, resulting that 200mg of chromium daily can massively reduce glucose and insulin levels enough to the level that their effects were comparable to drugs (metformin).

10. Cinnamon. There is credible evidence that cinnamon extract improves insulin resistance. Women with polycystic ovary syndrome have been shown to benefit from taking cinnamon since it may help regulate menstruation

11. Fish Oil supplements. Some research also indicated that omega-3 supplement levels can lower androgen levels in women with PCOS. It has been proven that PCOS women who were given 3 grams of omega-3 for 8 weeks had lowered testosterone levels and resumed regular periods compared to that placebo.

12. Inositol. For women with polycystic ovary syndrome, inositol has been shown to be a very helpful supplementation. Myo-inositol, when taken at doses between 1.2 and 4 grams per day, has been demonstrated to improve insulin resistance, lipid, and C-reactive protein levels. In addition, it has been demonstrated to lower the incidence of gestational diabetes in PCOS women and increase egg quality. Furthermore, it controls blood pressure, lowers insulin levels, and helps clean up polycystic acne.

13. Berberine. In traditional Chinese medicine, the herb berberine is used to treat insulin resistance. Berberine can boost metabolism and normalize endocrine responses in people with polycystic ovary syndrome, according to a study. Another study published in Clinical Endocrinology revealed that women with PCOS who were randomly allocated to receive berberine had greater pregnancy rates than those who received metformin (an insulin-sensitizing drug) or a placebo. 500 mg of berberine three times daily is usual (similar to that of metformin dosing).

It is prudent to consult your medical doctor and ask before you start any treatments on your own.

14. Acupuncture. There is sufficient evidence to support the use of acupuncture as an alternative therapy for polycystic ovary syndrome.  It has been proven in a study that acupuncture can help boost blood flow to the uterus, reduce the cortisol level and improve insulin sensitivity.

15. Sleep Hygiene. Studies show that women with PCOS are twice as likely to experience sleep difficulties. Doctors prescribe the following restful sleeping habits for limiting the effects of hormone shifts:

16. Surgery. In cases when medical intervention has failed to remedy reproductive issues related to polycystic ovary syndrome, laparoscopic ovarian drilling (LOD) may be an alternative. The doctor will make a tiny incision in your lower belly and insert a laparoscope under general anesthesia. The ovaries will be heated or laser-treated to eliminate androgen-producing tissue (male hormones). It has been shown that low-oxygen deficiency (LOD) reduces testosterone and LH levels while increasing FSH. Also, it has been proven to improve fertility by 50% within 1 year.

If you feel you may have PCOS, the first action you should do is to contact your doctor or primary care provider to determine if you match the diagnostic criteria.

12 Scientifically Approved Benefits & Uses of Matcha Tea. What Can Be the Side Effects?