Has anyone ever asked you what your type is? Why do certain individuals click immediately? Or conclude that a friend’s acquaintance was unlikeable? Do opposites attract, or are we more drawn to individuals with whom we have similarities? This article will address the significance, social support, and elements that drive attraction and relationships.

When people hear the term attraction, they instinctively believe it relates to physical intimacy and romantic interest. They also presume that those two types of connection overlap or are fundamentally similar.

But in reality, there are a lot of various sorts of attractions. It occurs in numerous ways and in different relationships for diverse social, psychological, and biological reasons, and each one of them is significant to who we individually are as humans. Also, each of these connections leads us to different individuals and helps us become the person we are.

According to research, attraction significantly influences interpersonal chemistry or the connection one experiences when meeting somebody for the first time.

The field of psychology known as the psychology of attraction investigates why we’re attracted to certain people but not others. Physiological changes in the body, such as the neurotransmitters dopamine and norepinephrine released in the brain, are hallmarks of physical attraction. The orbitofrontal cortex, which is responsible for processing sensory rewards, is also stimulated by attractive stimuli.

There are several sorts of attractions. Physical attraction occurs if you feel driven to touch them. There’s emotional attraction if the other person is compassionate, kind, and honest. If you need insight into the connection, you may be experiencing, let’s read the many types of it as we will cover details of each and their effect on relationships.

The term “physical attraction” refers to the fact that one person considers another person physically attractive. It is physical energy resulting from the chemistry between two individuals.

Some individuals are adept at employing body language appeal methods to capture, engage, and draw another person’s attention. What may begin as friendly body language and eye contact may develop into intense affection for one another. A 2015 study found that the most significant factors in determining attractiveness were the individual’s facial characteristics and degree of facial symmetry.

Here are some typical and evident indications of physical attraction between two people.

If you’re feeling physically or sensually attracted to someone, it’s probably because you want to be around them. Usually, this occurs in a couple’s relationship, but it may also happen with other types of relationships. Kids, friends, and family members are just a few examples of the individuals we frequently touch in ways that aren’t romantic or sexual. You don’t have to be romantically attracted to someone to need some physical affection.

Emotional attraction is an affinity for another individual based on their personality or other intrinsic qualities. It’s not the person’s outward look that piques your interest when you’re emotionally drawn to them; rather, it’s their character. Whether acquaintances, relatives, or a special someone, you might develop powerful emotions for many individuals. Those individuals are the ones you want to be fully present with emotionally, meaning that you are completely open with them about your innermost thoughts and feelings.

Unlike physical attraction (which might only be one-sided), the emotional appeal is typically equally powerful at both ends. 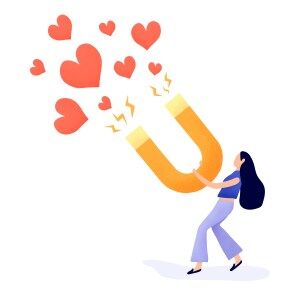 This is the type in which you want to be in a romantic relationship with a person. You may want to be with them without a sexual relationship aspect. Instead of focusing just on physical closeness, this sort of attraction focuses mostly on the inner qualities of the other person. A person with a romantic attraction towards another individual may need physical affection, seek connections with the individual, and desire romantic interaction, such as handholding, expressing love, or expressing affection. One can experience it as feeling romantically connected with that person, feeling close to them and wanting to spend time together as a couple.

In romantic love, people’s perceptions of their physical beauty also play a role. The Matching Hypothesis postulates that individuals choose mates who are approximately as appealing as themselves. We always appreciate those who affirm our perspectives and share our views, aspirations, and attitudes.

Science has not yet determined precisely what generates romantic attraction between two people. Even though all the perspectives have been studied, but still according to studies, the majority of romantic desire is subconscious.

The urge to have close, intimate contact with another person is one manifestation of attraction. This type can occur independently or with other forms of attraction.  We think this about our sexual partner and, ideally, the one we choose to spend our lives with. But you may also sense sexual attraction to other individuals around you. It is a drive for sexual contact and action with another person. However, the amount of power of those sentiments and their occurrence might differ from person to person. It can also develop or fade over time and alter in different settings.

When sexual attraction occurs in a friendly setting, the urge toward sexuality might hamper the connection if it is not mutually acknowledged and openly handled. Sexual attraction is vital in a romantic relationship, although some thrive when both sides believe it’s not.

Scientists have discovered that sexual attraction between humans involves more than just physical attributes or behavioural traits. Research suggests that our preferences for a mate may be affected as much by scent and sight in ways beyond the control of the rational mind. This may explain why we are drawn to people with symmetrical looks, physically fit, and who share our genetic makeup.

People who identify as asexual do not feel sexual attraction, yet many do feel romantic attraction. It’s not a sign of mental illness if you don’t feel sexual or romantic desire. Most people do sense attraction in these ways, and they often expect the same in return, so you may need to approach relationships with more caution than others.

Intellectual attraction is the attractiveness of someone’s thoughts or intelligence. This attraction might make you curious about the other person, eager to hear what they have to say about various issues, and open to gaining knowledge from them.

This form of attraction isn’t exactly in the same league as the others we’ve discussed, but that doesn’t mean it isn’t worth talking about. Some people must feel intellectually drawn to a person before they may feel emotional or even romantically attracted to them, although this is not true for everyone. Many believe intellectual attraction is an element of emotional attraction due to its non-physical character. But a strong intellectual attraction may indeed pave the way to a friendship and, frequently, to sexual desire since it stimulates a very deep emotional connection. 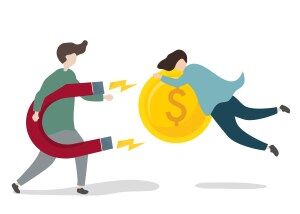 Have you ever thought a famous or random person on the street was attractive? Do you ever find yourself in awe of a photograph or a painting? If so, you’ve felt the pull of aesthetic attraction. Some could mistake this for physical type. However, those who place another person in this group don’t necessarily feel drawn to have physical or sexual contact with them. Looks-wise, this is a person you greatly respect and/or adore. Like a physical thing, their aesthetic appeal appeals to you. You just appreciate and adore the other person’s attractiveness. Despite appearances, this sort of attention is essential because it aids us in appreciating the beauty surrounding us.

An aesthetic attraction might extend to other visual stimuli as well. This aesthetic appeal influences the products you buy and how you decorate your home.

It’s fascinating to note that all five attraction forms can occur simultaneously or independently. You may, for instance, be physically attracted to someone, but after getting to know them more, realize that you feel no romantic or emotional connection. If you can identify and understand the individuals you feel attracted to, you’ll be more equipped to handle your emotions and manage relationships with clear limits and realistic expectations.

There are several ways in which different forms of attraction might affect your behaviour.

According to new studies, a person’s attractiveness influences others to judge their other qualities, such as intelligence and personality. Therefore, if you find a person physically attractive, you are more likely to attach the same other qualities to them. This is an example of something called the “halo effect.” This trait can affect how you see people in different situations, like deciding if you want to date them or hire them for a job. One study found that observers tended to attribute good traits like agreement with the statements and conscientiousness to those who were also assessed as more physically beautiful.

The feelings of attraction between two people are not fixed and might shift for various causes and at any time. A 2015 study found that a person’s perceived attractiveness might change over time. It means that just because something or someone appeals to your sense of beauty right now doesn’t imply that you’ll still feel the same way about them a year from now. Like a child who insists everything they possess be pink or blue, we eventually mature into a person who appreciates a wide range of hues and patterns.

What Makes Us More Attractive?

Scientists study what can be the cause of simple attraction between people, and they found the following reasons,

Attraction is an immensely complex phenomenon, and science will likely never discover all the reasons why you find someone appealing or why they find you attractive. Often, compatibility is the most significant factor, and it’s difficult to quantify that. But it is essential to remember that individuals feel attracted in various ways. Recognizing attachment and emotions may help you create a deeper self-awareness and better understand what you need in your interpersonal interactions. It is important to remember that given the complexity of the human mind and body, the way people experience attraction is unique. Don’t freak out if something you feel is different from someone else’s.

If you have issues building connections or understanding attraction, you may want to consult a mental health expert. An expert can assist you in comprehending your life and what needs to be modified. Professional assistance can help you build healthy connections and feel comfortable with others. Whether you struggle with all types of interaction or just a few, talking to someone can help.

The Best Nutrition in Pregnancy. What to eat and what not to?

Epigenetics Changes with Aging & How Can We Positively Utilize It?