Why would Dr. David Sinclair, an esteemed Harvard Medical School Professor specializing in genetics and longevity, go the extra mile avoiding dental X-rays and passing through customs? When we hear the term “radiation,” our minds immediately go to thoughts of mutations, large explosions, and other such things; nevertheless, there is always another side to the story. In addition, we have them in the form of rainbows and physicians looking at x-rays. So, what exactly is radiation, and why should we be concerned about its effects on our bodies?  Most of us have heard about radiation, but very few know what it is. This article provides complete knowledge of radiation and how we can use it in our favor.

Radiation is the release of energy that moves across space in the form of waves or streams of particles at the speed of light from a source. One can’t feel, see, hear, smell or taste it. Although one may only consider radiation when receiving an x-ray at the hospital, radiation is everywhere. This energy may take the form of radioactively released particles, such as alpha or beta particles, or waves, such as light, heat, radio waves, microwaves, x-rays, and gamma rays. Radioactive materials are unstable atoms, commonly known as radionuclides or radioisotopes. In nature, unstable atoms have a predisposition to transform into stable forms. As they undergo metamorphosis, they emit radiation.

Half of such dosage is caused by “background radiation” in the environment. The remaining half originates from medical, commercial, or industrial sources, with medical operations accounting for around 96% of a person’s man-made radiation exposure.

How much background radiation you’re exposed to depends on altitude and ventilation. Average annual exposure is 3 mSv.

How Is Radiation Measured?

Scientists measure radiation in numerous ways. Sometimes, they assess a person’s dosage from a radioactive source, and sometimes they measure the quantity of radioactivity in water, soil, or air. These measures are collected to assess whether safety actions are required.

The absorbed dose is the quantity of energy per unit mass in an item or person. Absorb dosage is measured in grey and rad (rad, U.S. unit).

The effective dose is derived by adjusting the absorbed dose for radiation source and relative organ sensitivity. The outcome indicates the exposure’s potential to cause long-term health problems (such as cancer and hereditary damage). It sets restrictions to preserve a population’s long-term health. It lets specialists compare health impacts from various exposures. Sievert (Sv) and rem are effective dosage units (rem, U.S. unit). A rem is a large dose of radiation, so the millirem (mrem), one-thousandth of rem, is often used.

The International Standard of Units (SI) is currently the official system of measurement for radiation, and it uses the “grey” (Gy) and “sievert” (Sv) for absorbed dosage and equivalent dose, respectively. Sievert is quite a large unit to measure, so smaller units of sievert are used such as microsieverts or millionth of a sievert.

There are radiation sources all around us at all times. Some are natural, while others are artificial. The dose measures the quantity of energy absorbed by a person. A person’s total dosage is equal to the quantity of radiation that they have absorbed.

The following pie chart depicts the origins of this average dosage in the US population. 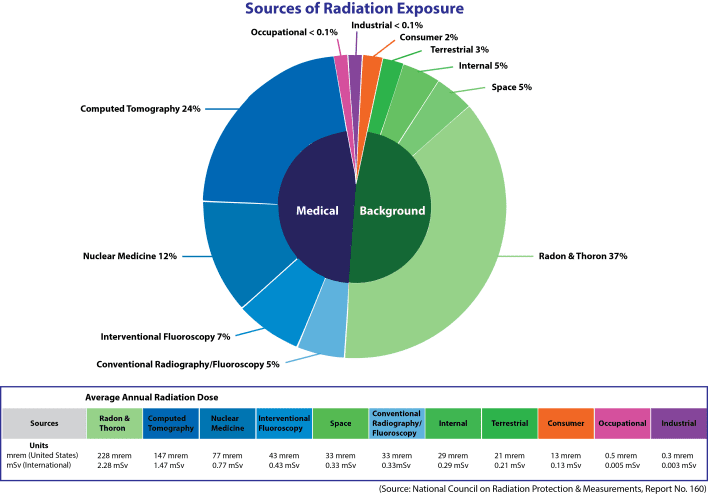 Radiation is used in several imaging procedures to identify medical diseases, although the dosage varies significantly.

Outside of radioactive substances, medical sources are the most prevalent source of exposure in the United States making up almost 48% of exposure.

The Nuclear Regulatory Commission estimates that the typical American is exposed to around 620 millirems (6.2 mSv) of radiation per year from both environmental and man-made sources.

There are several factors that can affect the dosage and its reaction on the body, 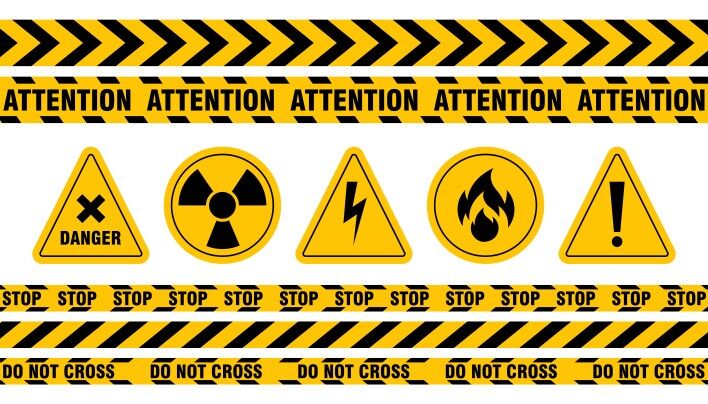 Medical imaging often brings issues regarding radiation exposure. Patients want to know whether rays from mammograms, bone density tests, computed tomography (CT) scans, and other diagnostic procedures may raise their cancer risk. The exposure one gets from x-rays and MRI etc. are basically ionizing meaning Ionizing radiation may cause DNA damage, and although your cells are capable of repairing the majority of the damage, they sometimes leave behind tiny patches of “ill-repaired.” Eventually, these DNA alterations may lead to the development of cancer.

X-rays: may trigger DNA mutations and later-life cancer. Both the WHO and the US government classify X-rays as carcinogens. However, the advantages of X-ray technology much exceed their potential disadvantages. According to one research, X-rays would contribute to the risk of malignancy by 0.6% to 1.8% by the age of 75. In other words, the hazards of medical imaging are minor in comparison to its advantages. In addition, it is debatable whether very low X-ray exposure may induce cancer at all. According to a new study published in the American Journal of Clinical Oncology, X-ray techniques pose no danger. How are X-rays beneficial in a person’s health exam? read here.

Microwave: Microwave ovens emit non-ionizing radiation, which is comparable to the radiation emitted by our mobile phones, but considerably more powerful. It has also been studied in two different reviews that microwaving does not degrade nutritional content more than conventional cooking techniques. Metal shields and screens above microwave oven windows prevent radioactive from escaping, so there’s no risk of damage. While exposure to microwave oven radiation does not cause cancer, it may produce severe burns. So generally, microwave ovens are safe to use and will not cause cancer or any other severe health concerns.

Cosmic Rays: Not all solar radiation reaches the surface of the Earth. Much of it is absorbed, reflected, or dispersed by atmospheric processes. On the surface, solar energy may be absorbed either directly from the sun, known as direct radiation, or indirectly from light dispersed by the atmosphere, known as indirect radiation. Approximately 5% of a person’s yearly radiation exposure in the United States comes from cosmic radiation. The average annual dosage or exposure to cosmic radiation is 0.33 mSv (33 mrem), or 11% of a person’s total annual exposure from all-natural sources.

At ground level, cosmic rays are typically not an issue, and no clear relationship between cosmic rays and cancer has been shown. This minimal radiation exposure is unlikely to pose a health risk to humans.

Cancers: For levels exceeding 10 rems(10mSv), the danger of increased cancer incidence is well-established. It hasn’t been practicable to establish whether low dosages raise cancer risk objectively, but many experts think they do and that the risk is proportionate to the amount. The risk estimates for low dosages are derived by extrapolating from findings of high doses.

What are The Limits or Such Radiations? The International Committee on Radiological Protection recommendations restrict nuclear workers to 20mSv per year or, in rare instances, greater yearly exposures, capped at 100mSv over five years. Public doses from nuclear power plants and labs, as well as leakage from, for example, medical radiation sources in hospitals, should be restricted to 1mSv per year.

Scientists have been studying the effect of radiation on the human body and how this radiation interacts with living tissue when exposed to the body. It has been studied that once ionizing radiation damages the cell, three things can happen, one is the self-repair of the damaged tissue, and the second possibility is the cell is ill-repaired or altered in its normal shape and size, leading to cancer. The last one is that there is too much damage to the cell, and it dies.

Reduces the Lifespan: According to the data, the radiation sensitivity of individuals over the age of 40–45 seems to grow with age. The median life expectancy reduced at a rate of around 0.3 years per 1000mSv with increasing radiation dosage but declined more quickly at high doses.

High amounts of radiation are always hazardous, although certain body regions are more vulnerable than others. According to the Collaboration for Nondestructive Testing, the lymphoid organs, bone marrow, blood, testes, ovaries, and intestines are the most sensitive sections of the human body.

Can Cause Skin Cancer: Unprotected exposure to UVA and UVB strains the DNA of skin cells, causing mutations that may lead to skin cancer (as well as premature aging.) These rays may also cause eye damage, such as cataracts and malignancies of the eyelids.

Using the tools mentioned (1)(2), you may calculate your annual dosage from the most common types of ionizing radiation. The effective dosage is reported in millirem (mrem), the American unit.

There are very simple measures to decrease your exposure to electromagnetic radiation. These methods entail lowering both the amount and duration of exposure.

It is never too late to exercise sun protection to avoid future photodamage. Dermatologists advocate applying a broad-spectrum sunscreen that protects against UVA and UVB radiation. The sun protection factor (SPF) should be at least 30. Waterproof formulations are suggested. Apply sunscreen every two hours or more often if swimming or exercising. Check out this article to choose the right sunscreen for you and for the sea environment.

Shielding : Similar to how time, distance, and protection protect against overexposure to the sun, these factors reduce your exposure to radiation.

In general, it has been recommended that the following may block alpha, beta, gamma, and x-ray radiation:

Antioxidants For at least fifty years, researchers have examined the ability of antioxidants to prevent the cytotoxic effects of radiation on normal tissues. After World War II, several antioxidants were discovered to protect against the detrimental effects of ionizing radiation when given before exposure. According to a 2017 study, a new natural antioxidant blend protects endothelial cells exposed to low-dose radiation from oxidative and DNA Damage.

Since the beginning of time, radiation has been a component of our planet. No matter what we do or where we go, this energy cannot be avoided. The Earth’s crust, the floors and walls of our houses, schools, and workplaces, and the food we consume and drink all include naturally occurring radioactive material. We inhale a radioactive gas cloud every day. Our muscles, bones, and tissue all contain naturally occurring radioactive elements, which may harm our health.

It has to be kept in mind that radiation can affect the body in a number of ways and the effect of its exposure may not be known for many years too. For lower doses of radiation, there may be no health effect at all. But if the dose is high, medical professionals may perform tests and conduct screening to treat and detect the health issue.

What Is a Complete Blood Test? When Do We Need Them?

A Guide to Allergies, What Are the Types, Causes and Management.