Cancer is composed of abnormal cells that increase even though the body has no use for them. In most cancers, the faulty cells develop to create a mass or lump. Cancer cells can spread to neighboring regions if they remain in the body long enough. They are even capable of spreading to other organs (metastasis). Among all cancers, stomach cancer is the fifth most frequent. It ranks as the fourth most prevalent cancer for men, while for women, it ranks as the seventh most common. By 2020, there had been over a million new instances of stomach cancer.

The stomach is a component of the gastrointestinal system responsible for breaking down and digesting food and removing waste from the body. There are five distinct stomach layers. Stomach cancer most frequently develops in the mucosa, the innermost layer of the stomach. Small changes occur in the DNA of stomach cells, telling them to multiply and forming an abnormal growth which we call a tumor. It can develop when the cells that line your stomach transform and expand uncontrollably. The medical term for his tumor is adenocarcinoma.

The annual number of cases of stomach carcinoma in the United States is estimated at 25,000 by the American Cancer Society. Due to the lack of early signs, stomach cancer is commonly identified at an advanced stage. This makes it more challenging to treat.

Adenocarcinomas make up most stomach cancers (almost 90%), which begin in the cells producing mucus and other fluids. Other, less common forms of stomach cancer include: 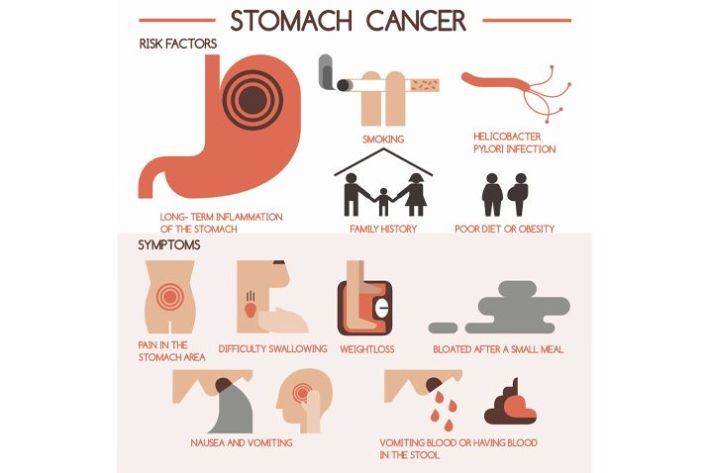 Cancer of the stomach usually evolves gradually over a long period. Before full-fledged cancer develops, pre-cancerous modifications commonly occur in the stomach’s inner lining (mucosa). This is because these changes occur before symptoms appear. Thus, they are frequently missed. Signs of other gastrointestinal issues, such as ulcers or infection, might be easily mistaken. Here are a few possible red flags:

Even the most frequent early indicators of stomach cancer, unexplained weight loss, and stomach discomfort, don’t appear until the disease has advanced. Many people, including medical professionals, may not detect stomach cancer as a major factor in its late diagnosis. Black stools are a rare indication of stomach cancer that often manifests in the latter stages of the disease (a sign of bleeding in the stomach). It is always wise to consult your physician if you have any of these symptoms. Even if the cause is not stomach cancer, they may be symptoms of other treatable health conditions.

Unfortunately, gastrointestinal cancer is typically not recognized until it has progressed significantly since its early stages are rarely accompanied by any noticeable symptoms. The first step in diagnosing stomach cancer begins with a thorough physical examination and an overview of your family history. This will assist in identifying recognized risks for this type of cancer. In addition to standard physical examinations, the following tests can help detect stomach cancer in patients with various symptoms or risk factors. 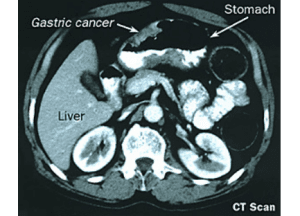 Tumors and other abnormalities that may be cancer-related can be detected by radiologic testing, such as a CT scan, barium swallow, or MRI. Consuming barium before an X-ray examination allows doctors to examine the stomach’s lining better. If cancer has spread to other parts of the body, a PET scan will show it.

Cancer staging is often done using the American Joint Committee on Cancer’s TNM method. This helps doctors to plan the best treatment regimen for the patient and is always used with other methods of diagnosis and detection. Three factors are taken into account by the system.

Results from each group are added together to obtain a score from 0 to 4. As the stage of cancer decreases, the likelihood of survival increases. Each stage is represented in the clinical method as follows, 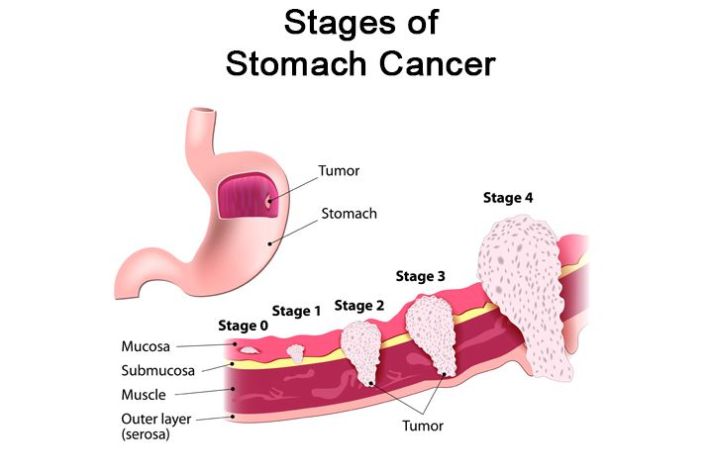 It will be between stages 0 and 3 if cancer hasn’t spread to other places of the body. Stage 4 stomach cancer is diagnosed when the disease has spread to other parts of the body. As cancer spreads more into the body, a patient’s prognosis worsens. Like other types of cancer, a malignant tumor can grow in the stomach, spread to the liver, pancreas, and intestines, and even further through the circulatory system to the lymph nodes, bones, and lungs.

The outcome of stomach cancer has substantially improved over the past two decades as our understanding of the condition has grown. Reasons for this growth include the introduction of novel treatments and the refinement of surgical and postoperative care. Still, if anyone is suggested to go for a treatment, health care professionals employ the following methods to treat the disease and extend the lifespan.

Treating stomach cancer in its early stages may be a viable option. A preoperative examination is important since the type of surgery is determined by the size and location of the tumor. The two most common kinds of gastric surgery are partial and complete. The histological pattern of the tumor, the tumor’s size and extent, and its location all play a role in deciding what kind of resection will be performed.

Surgeons often remove lymph nodes during surgery due to the possibility of cancer spreading to them.  This operation is known as lymph node removal. Even when stomach cancer has progressed to an advanced stage, surgery may be recommended to lessen the risk of consequences such as organ obstruction or internal bleeding. Among those who had their tumors removed surgically, the 1-year, 3-year, and 5-year survival rates were 82.7%, 46.3%, and 31.1%, respectively.

Radiation treatment, commonly known as radiotherapy, involves using X-rays and other focused radiation beams to kill cancer cells. Patients typically undergo external-beam radiation treatment, in which radiation is delivered by a machine rather than a human being. Before surgery, radiation can reduce the size of the tumor, and after surgery, it can eliminate any leftover cancer cells.  It is usually used with chemotherapy after surgery to eliminate any cancer cells missing during the first procedure, as it is not useful as a sole treatment.

Radiotherapy has the potential to be helpful in the treatment of advanced stomach cancer by removing obstructions in the digestive tract. Blood loss from inoperable tumors may also be stemmed with this method. Side effects include tiredness, moderate skin responses, stomach distress, and loose stools. The majority of adverse effects disappear shortly after therapy has ended.

The goal of chemotherapy (chemo) is to reduce the size of cancer cells so that they may be more easily removed during surgery or after surgery. Bioactive molecules are used in chemotherapy to reduce the number and size of malignant tumors.  Additionally, chemotherapy can be used to eradicate any cancer cells that may still be present following surgery. After surgery, it may be administered alone or in conjunction with radiation. For patients with advanced stomach cancer who are no longer surgical candidates, it may also be utilized to alleviate their symptoms or extend their life expectancy.

Usually, 2-3 drugs, are used and these medicines are commonly combined (sometimes along with a targeted drug as well). This depends on the cancer’s stage, the patient’s condition, and if chemo is paired with radiation.

As researchers understood more about cancer-causing cell mutations, they devised new medications to target them. The doctor may investigate your tumor’s genes, proteins, and other features to select therapy. Targeted therapy is rapidly becoming the preferred method of treating cancer because of its superior efficacy over chemotherapy. In contrast to chemotherapy’s 30% success rate, tailored treatment can achieve this goal in as many as 80% of patients.

This type of treatment aids your immune system in identifying and eliminating cancer cells that may be difficult to detect. It is often reserved for cases of advanced or recurrent malignancy. Opdivo (nivolumab) in conjunction with some forms of chemotherapy, has been given the green light by the U.S. Food and Drug Administration in 2021. Immunotherapy can produce varying side effects. Skin rashes, flu-like symptoms, diarrhea, and weight fluctuations are common.

A cancer patient’s quality of life can be greatly enhanced by receiving palliative care. Medical professionals such as physicians, nurses, and others trained to alleviate suffering through palliative care are available. They may also be able to give one supplementary help that will supplement the services of their usual doctors. Palliative care can be provided in conjunction with other medical interventions.

It’s important to discuss the desired outcomes of each therapy modality with your doctor before beginning treatment. You should also discuss palliative care choices and any potential adverse effects of the prescribed therapy.

In conjunction with symptomatic therapy, the nutrition and its consistency must be modified to the symptoms.

Many incidences of stomach cancer can still be avoided even though its precise origin is still unknown. Early detection may be the best strategy to increase the likelihood of effective treatment and decrease the number of deaths caused by the diseases.

Fruits and Veggies: The antioxidants included in fruits and vegetables have been shown to aid in the body’s combat against cancer.  Eat at least five servings of fruit and vegetables every day.

Use of Alternative Methods for Food Storage: Stomach cancer rates has decreased over the past 60 years due to changes in nutrition and the widespread adoption of refrigeration for food preservation (as opposed to salting, pickling, and smoking).

It is unclear at this time if patients who have had a Helicobacter pylori infection for a long time should be treated to reduce their risk of developing stomach cancer. The research on this subject continues.

The Top 5 Internal Cysts & Thier Research Based Treatments.