At any one time, many of us have hundreds of different thoughts running through our minds. Even though we often have trouble keeping track of all that is expected of us. However, there is one thing that we do not have to be concerned about remembering, and that is breathing. What is the function of breathing? We will look into all of this in our article. First of all,, we need to know how we breathe.

How Do We Breathe?

When you breathe, you are transporting oxygen to the body cells to keep them working and clear your carbon dioxide system. In other words, breathing keeps the body alive. So, to understand the science behind this crucial and complicated task, the respiratory system. Like any other machinery, it consists of particular components and requires triggers to function. In this case, the triggers are structures like tissues and structures making up the lungs as well as the various other respiratory organs connected to the lungs. And to get this machine moving, we need the autonomic nervous system which is our brain’s unconscious control system for our vital functions. 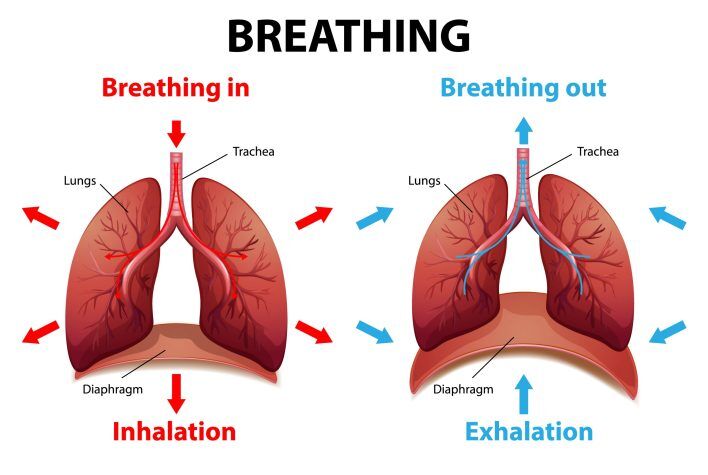 As the body prepares to take in oxygen-rich air, this system sends a signal to muscles surrounding the lungs, flattening the diaphragm, and contracting the intercostal muscles between your ribs to create more space for your lungs to expand. Air gushes into your nose and mouth through the trachea and into bronchi which splits at the trachea’s base, one entering each lung. Just like tree branches, the small tubes further divide into thousands of smaller passages called bronchioles.

The lungs are similar to large balloons, but instead of being empty, they are spongy on the inside, and each end of the bronchioles is called alveolus (plural alveoli), which is covered with capillaries and contains red blood cells and the well-known hemoglobin. These sacs are inflated by the air we breathe, causing the lungs to expand. This is the location where carbon dioxide and oxygen are exchanged via diffusion because carbon dioxide is abundant in the capillaries and oxygen is abundant in the air. As oxygen diffuses in capillaries, hemoglobin takes it up and transports it to other regions of the body that need it.

Therefore, carbon dioxide is delivered to the lungs, where it is released by exhalation with the support of the autonomic nervous system, which signals the diaphragm to contract and the intercostals to relax, resulting in a smaller chest cavity. This results in the expulsion of air, and the cycle starts again. This is how these spongy organs maintain our respiratory system without our awareness.

The average breathing rate is between 15-25 times per minute providing almost 10,000 liters of air in a day.

Children’s respiratory rates are greater than adults’, according to a 2021 article. At the age of 2, a child’s breathing rate decreases from 44 breaths per minute to 26.

What happens When a person Doesn’t Breathe?

Those in great health can hold their breath for roughly 30 seconds to two minutes. Brain damage is irreversible after just four minutes without oxygen, and death may occur within four to six minutes.

But it can also be improved with training and significantly reduce the discomfort if you have any lung-related disorder. Learn more about those disorders and what exercises to do in this article here.

What are the Types of Breath?

Temporary illnesses that restrict nasal passages might cause mouth breathing such as nasal congestion and altered nasal division. In this condition, individuals generally experience a runny or congested nose, which is normal. Chronic mouth inhaling may have lifetime health consequences, including stress.

30-50% of individuals breathe via their mouth, particularly in the morning. People that breathe via their mouths often have narrow features with receding chins or jaws. Signs you might be in the habit include having bad breath, dry mouth or snoring, hoarseness, tooth decay, allergies, confusion, and fatigue upon waking up. There is no one test to diagnose mouth breathing; it requires a multi-disciplinary strategy to reduce cascade effects. During a physical exam, a GP may identify mouth breathing by looking at the nostrils or nasal congestion. They may inquire about snoring, sleep, breathing difficulties, or sinus issues. If you have cavities, poor breath, or gum disease, a dentist may diagnose mouth breathing during a normal check.

When conducting a strenuous exercise or if your nose is clogged due to congestion, a cold, or allergies, is the only time it is super necessary to inhale through your mouth. In certain cases, temporary mouth breathing might assist you to receive air to your lungs faster.

How to Breathe Correctly?

Here’s a quick test to see whether or not you have healthy breathing habits. Start taking some slow, deep breaths, and try to relax. Do your shoulders rise and your body becomes more elongated when you take a breath in? Do your shoulders return to their starting posture and do you feel a contraction in your chest as you let out an exhale? If you answered “yes,” then you are doing something wrong.

Taking a breath may seem simple, but did you know that there is an art to it? Diaphragmatic breathing” is the medical word for what most people refer to as “belly breathing.” The American Lung Association (ALA) provides the following recommendations for proper breathing.

Inhaling via the nose improves lung function and slows breathing. This makes nitric oxide intake simpler, which helps with oxygen transfer. Also, you should incorporate the stomach as well. While inhaling, your stomach should expand, and you should also feel the expansion of your lungs. As a result, oxygen is taken deep into your lungs, filling them to capacity. As you exhale, your stomach will move closer to your spine and the gap between your ribs will become smaller. Activating the diaphragm muscle helps to ensure that you take in the correct amount of air.

When & How to Use Breathing

If you’re interested in trying out breathing exercises to relieve stress or anxiety, or to enhance lung function or to aid in sleep, these below mentioned ones. You may discover that some workouts immediately appeal to you. Begin with them to make practicing more fun.

Many people breathe through their mouths when they work out. This can happen if you breathe quickly, which makes your nose less adaptable and makes you breathe through your mouth instead. Nasal breathing is preferred as per 2020 scientific research. Even in 2018 research, a comparison was carried out in respiratory rate in nose vs mouth breathers. The result suggests that nasal breathing requires less effort to consume the same quantity of oxygen, which might possibly increase athletic performance and endurance.

Not only can good breathing assist the effort of the workout and help you to lift more weight with greater control, but it may also lead to hernias if it is neglected. You may also try these approaches for safe and productive exercise, 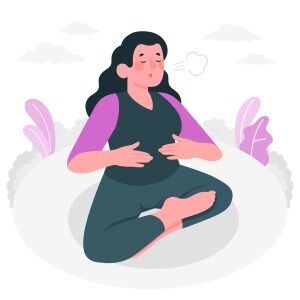 There are several breathing methods for meditation with various origins. You may try them all and select your favorite, or mix them into one session. Meditation helps rid the mind of unwanted ideas, reduces stress, and improves health. Here are some popular breathing techniques:

One can try box breathing to reduce stress or improve their ability to focus. Also called square respiration, it is a way to slow down the respiratory system. Studies reveal that box breathing may have the potential to alter future stress responses. To do this, one should sit straight on a comfy chair for optimal results while resting the hands palm-up in the lap or on the knees might aid in maintaining a calm upper body. Then one must follow the given sequence,

As a quick and effective treatment for hyperventilation, you might attempt the following techniques:

Breathing through pursed lips is also preferred with holding breath for 15-20 seconds at a time.

Individuals who suffer from stress may want to give lion breathing a try. This practice combines facial stretches with deep breathing to ease stress and tension. Deep exhalation helps relax the muscles. It has been studied to have a good effect on emotional expression, social involvement, and physical performance. To accomplish lion breathing, an individual must:

Another method that can be utilized is Resonant breathing which is 5 complete breaths per minute. Breathing at this pace optimizes HRV, decreases stress, and helps alleviate depressive symptoms when paired with Iyengar yoga according to 2017 research. To perform this, Inhale for five counts, then exhale for five counts, and continue this practice for few minutes until relaxed.

When a person is trying to go to sleep, focusing on their breath and counting their breaths might help distract them from tension or anxiety. Breathing becomes more regular and the body relaxes as a result of this approach. A very interesting method is used for inducing sleep which is known as the 4-7-8 method. Before heading to bed, try this relaxation technique to help calm an overactive mind.

Before beginning this exercise, individuals should place the tip of their tongue on the roof of their mouth, relax their muscles, and exhale completely through the mouth. Breathe in via the nostrils for a count of 4, While holding the breath count for 7, and then opening lips and exhaling with counting of 8. The 4-7-8 breathing may be performed anywhere, except when driving or doing else requiring complete focus.

To Connect Deeply to your Body

It is a very unique technique to gaining control over your body, breath, and mind via the use of particular breathing methods and tolerance to harsh temperatures. The objective of the Wim Hof Method breathing method is to teach you how to get control of your neural, immunological, and cardiovascular systems in order to become happier, stronger, and healthier. It has the following steps,

Round one is now concluded. It is possible to continue this cycle 3-4 times without interruption. After completing the breathing exercise, take a moment to enjoy the feeling of relaxation.
BENEFITS: By doing the Win Hoff method, you release more energy, influence your neural system, and alter a variety of physiological reactions. The following results were obtained from research that was carried out on this technique,

PRECAUTIONS: There are many ongoing research and despite that, there are possible risks and contraindications associated with the Wim Hof Method. The Wim Hof Method is not advised for anyone with a history of:

Breathing is among the most important bodily processes. Normal breathing should be accomplished via the nose since this has been well-established. Follow the right method to breathe and if you have any respiratory disorders, please refer to this article here for some special breathing exercises. People who are interested in breathing methods but are skeptical of their abilities to self-regulate may benefit from using an app. Apple’s and Google’s app stores provide a variety of applications for different devices. But it should always be considered that you should never substitute breathing methods for medical treatment. These exercises are most effective when combined with other therapies.

Revealing The Myths of Muscle Soreness.

The Most Common Breathing Disorders. And Signs of Aging Lungs.