We are all born with greater lung capability than we would ever need in our lifetimes. When we inhale, we replenish our body’s supply of oxygen. Carbon dioxide is exhaled out of the body. For a healthy lifestyle, both functions are required. However, various health issues or even the natural aging process may have a substantial impact on our capacity to breathe comfortably. If the diaphragm muscles weaken as a person age, it may become harder for them to breathe and causes many breathing disorders from minor ones such as shortness of breath to major ones like pneumonia, asthma, and bronchitis.

Knowing how your lungs operate is essential if you want to know how aging affects them. To get a deep insight into how this system works, you can refer to our article here.

Between the ages of 20 and 25, your lungs reach full function. Lung function normally declines beyond age 35.

The state of one’s lungs, in particular, might deteriorate with time. It’s easy to assume that you’ll always be able to breathe comfortably, but as we age, our lungs weaken and become more susceptible to illness. The way you breathe changes as you grow older because of these changes. As you become older, these and other changes might make you more susceptible to breathing problems.

The following changes can occur as we age,

We know our bones won’t be as strong and smooth as before. Our rib cage may harden and stiffen like other bones and joints. Your ribs lose some of their bulk over time because you lose bones. American Society of Mechanical Engineers (ASME) Proceedings found that ribs calcify with aging. They become brittle and stiff. The X-rays revealed according to a study that calcification grew from 6% in a person’s 30s to 45% in his or her 90s. Calcification causes a stiffer, less mobile rib cage. The rib cage may shrink when the intercostal muscles weaken and shrink and may squeeze the lungs, making breathing harder.

These alterations to the bones and muscles may reduce the amount of oxygen in the body. Additionally, less carbon dioxide may be eliminated from the body. Symptoms may include fatigue and shortness of breath.

2. Changes in the Lung Tissues.

With the passage of time lungs change, too. They become flaccid and less elastic, losing their property of recoiling back. Also, as a result of aging, the air sacs lose their structure and become saggy. Aging contributes to a loss in respiratory muscle mass and strength, as well as a deterioration in respiratory function. The diaphragm, the muscle that supports respiration, gets weaker. Thus, in return, they require more surrounding muscles to work.  This weakness may hinder adequate inhalation and expiration. This may begin as early as 40 years of age.

Your immune system might weaken over time. This reduces your body’s ability to fight against lung infections and other illnesses. Additionally, your lungs are less able to recuperate after being exposed to smoke or other hazardous particles. In the Journals of Gerontology, researchers found that as people age, the lungs are repeatedly exposed to a variety of environmental pollutants. Air pollution, cigarette smoke, industrial dust, and respiratory diseases are just a few examples. They become more prone to toxicity and inflammation according to 2013 research.

4. Changes in the Nervous System.

The brain and its nerve system are also essential for respiration since they transmit information between the brain and lungs. This may cause issues by reducing oxygen intake and increasing carbon dioxide retention. Over time, signals from the brain to the lungs and nerves throughout the lungs may become less responsive. If nerves are unable to detect dust or other particles, this might create breathing problems or a buildup in the lungs.

The greatest quantity of air that your lungs can contain, known as your total lung capacity, is around 6 liters. As you age, though, your lung function steadily falls. This is around 5 liters for the average man at 25 and declines to approximately 3.9 liters at age 65. In women, it falls from around 3.5 liters to approximately 2.8 liters. Decreased lung function is associated with reduced ventilation of air and oxygen intake, especially during exercising. These decreases are mainly related to chest-wall stiffness and respiratory muscle weakness as they had been studied. In addition, reduced lung function could also affect other body functions such as sleep.

One may discover that breathing is more difficult than it was when you were younger, or that you have frequent shortness of breath.

Even in healthy individuals who have never smoked, forced vital capacity might drop by roughly 0.2% every decade.

Immunocompromised individuals and the elderly are at a greater risk for breathing problems and bronchitis, shortness of breath, low oxygen levels, and breathing problems such as sleep apnea. This is due to the fact that as you age, the physical components involved in breathing might begin to degrade or function less effectively. As a consequence of these changes, the risk for the following is enhanced for the elderly, such as infections of the lungs, such as pneumonia and bronchitis, shortest of breath, resulting in issues such as sleep apnea, are caused by low oxygen levels (episodes of stopped breathing during sleep).

What Are Breathing Disorders?

When you cannot get enough oxygen, your chest feels extremely tight, you are short of breath, or you feel as if you are suffocating, you are experiencing breathing problems. According to WHO, one may have shortness of breath if one is obese or if one has recently engaged in vigorous exercise. It may also occur under conditions of severe temperature or altitude.

When they have a cold, some individuals have more difficulties breathing than others do. In some people, the condition is brought on by illnesses such as sinusitis. Viruses and allergens may reach your lungs via your nose route. Numerous breathing problems have been connected to issues with the nose and sinuses. Asthma episodes may be triggered by inflammation of the nasal or sinus passages. And allergies are the most common cause of asthma. A variety of lung disorders might result in breathing problems. Many of these conditions need prompt medical care. 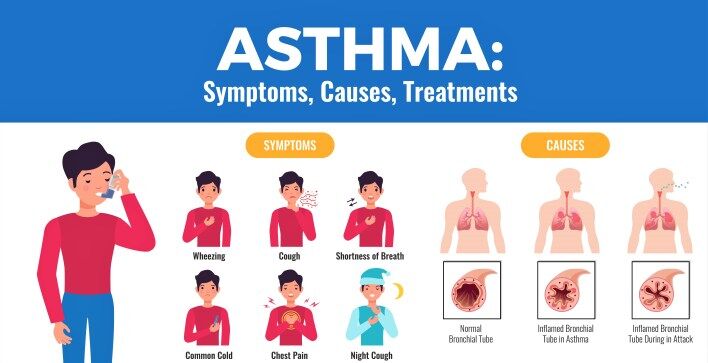 Asthma is a disorder characterized by constricted and swollen airways that may create excess mucus. This may make it difficult to breathe and cause coughing, wheezing, and shortness of breath. For some, asthma is a minor inconvenience. Anything can cause asthma such as pollen, dust mites, animal hair, and feathers. Smoke, emissions, mold and pollution, anti-inflammatory analgesics such as ibuprofen and aspirin, and emotions, such as anxiety or joy. Anyone may get asthma. It is more frequent in allergic or tobacco-exposed persons.

Effect of Aging? Several European and US research reveal asthma prevalence among over-65s ranging from 1.8% to 10.9%. 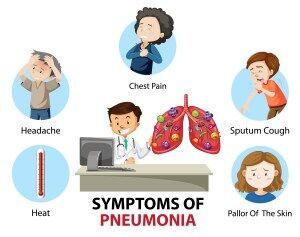 Pneumonia is an illness that inflames the air sacs of the lungs (alveoli). The air sacs may fill with fluid or pus due to an infection, resulting in cough, fever, chills, and difficulty breathing. This pulmonary illness is contagious. Infants under 2 and the elderly above 65 are more in danger because their immune systems are weak. Many types of microorganisms can cause it, such as Bacteria, viruses, or fungus. Common ones include Flu and Cold viruses, RSV virus (the top cause of pneumonia in babies age 1 or younger)
and the bacteria Streptococcus pneumoniae and Mycoplasma pneumonia.

Effect of Aging? Pneumonia is more common in elderly adults than in younger ones. Recent research showed that almost 1 million senior Americans are hospitalized with pneumonia each year.

COPD is an umbrella term for many different types of breathing problems including Emphysema, which is an injury to the air sacs in the lungs, and Chronic bronchitis which is long-term inflammation of the airways. COPD is a prevalent disease that mostly affects middle-aged or older smokers. Many individuals are unaware they have it. The breathing problems worsen with time and may impede regular activities, although medication can reduce them. Symptoms include shortness of breath, chronic cough with clear, white, yellow, or greenish phlegm, unintended weight loss, chest tightness, frequent lung infections, low oxygen levels, and lack of energy.

In 1% of COPD cases, a genetic condition produces low alpha-1-antitrypsin (AAt) levels. More than 65 million people throughout the globe have moderate or severe COPD, and experts project that this figure will continue to climb globally over the next 50 years.

Effect of Aging? Over the age of 60, the prevalence of COPD is two to three times greater than in younger age groups.

Global estimates of pulmonary hypertension vary from 20 million to as many as 70 million individuals. Its incidence increases with age.

Effect of Aging? US and European registries corroborate the rising prevalence of elderly patients upon diagnosis, with 9–13.5 % aged >70.

Doctors diagnose breathing problems by doing a physical examination (learn more about how a physical examination can be performed here), interrogating you about your general health, and conducting several diagnostic tests. The overall objective is to evaluate how much air your lungs can retain, how effectively oxygen replaces carbon dioxide, and how rapidly your lungs take in and release air. The following are the most used in medical settings are,

Even if you don’t give your lungs much thought, if you want to avoid breathing problems, you need to adopt certain lifestyle adjustments. Even if you can’t change everything, there are still numerous things you can do to protect your lungs. To guarantee that your lungs are always working at their best, you need to adopt certain lifestyle adjustments. Following these instructions will allow you to keep good breathing throughout your lifetime. 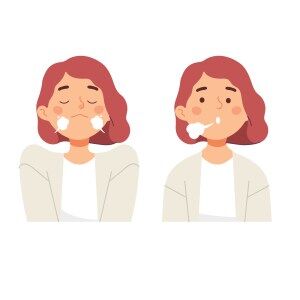 This exercise decreases your breathing rate and keeps your airways open for longer. Your lung capacity is increased, allowing you to engage in greater physical activity. To practice it, just breathe in with your nose and your mouth closed. Inhale for two seconds. As if whistling or blowing out a flame, pucker the lips and exhale for 4 seconds.

As with pursed-lip breathing, inhale through your nose. Observe how your stomach expands. Put your hands or a tissue box on your tummy to feel your belly rise and fall. Exhale for twice as long as you inhale. Relax your neck and shoulders while retraining your diaphragm to help you breathe. Repeat these instructions every five to ten minutes. Maintaining the hands on the belly might increase awareness of the proper breathing technique.

Ideally, people should do both exercises daily for 5–10 minutes.
Some individuals may need to gradually build up to this period.
Nasal Congestion Workout.

Both allergic and non-allergic sufferers may have their clogged noses relieved by completing a breath hold in the manner described below:

Despite the fact that aging causes a loss of lung function, there are ways to keep yourself as healthy as possible.  There are several strategies to preserve and enhance your lungs, such as exercising regularly, avoiding smoking, and keeping up with vaccines. The correct diagnosis and therapy, as well as a greater knowledge of your situation, may assist you in managing your breathing problems.

Here’s a detailed article that offer various techniques to breathe healthfully; check it out!

What Causes Food Allergies, Signs and Symptoms With its 10 Types.

What Causes Food Allergies, Signs and Symptoms With its 10 Types.

The Science Behind Breathing. The Mechanism and Exercises for Better Breathing.