In recent decades, there has been a significant change in the pattern of births. Due to their occupations or delayed marriages, many women are delaying pregnancy. Although deciding when to have a child is completely personal, the truth remains that our reproductive system does not function according to our will. This article will discuss the reproductive system and the chances of achieving pregnancy at various ages.

Some people are stunned to learn that a woman’s monthly fertility rate typically reduces with the passage of time. From the onset of adolescence until the beginning of menopause, a woman’s ovaries release an egg into her uterus every month. Pregnancy occurs when an egg fuses with sperm inside a woman’s uterus. It may appear that a fresh egg is produced every month, but this is not the case. At birth, females already possess all the eggs they will ever have. One’s egg age reflects one’s chronological age. 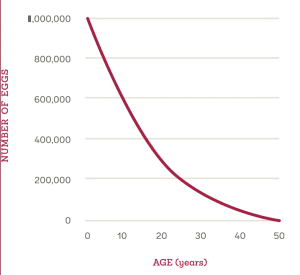 A fetus with ovaries inside the mother’s womb has the potential to produce up to six million eggs.! And by the time a kid is born, there are only about 1-2 million eggs (oocytes) in their ovaries. But if there are eggs, why don’t women menstruate from birth? The answer lies in the production of gonadotropin-releasing hormone by the hypothalamus in the brain, marking puberty’s onset. FSH is produced by the pituitary gland due to stimulation by the gonadotropin-releasing hormone and causes the eggs to grow, leading to the monthly cycle.

Even though more and more women are waiting till their 30s and 40s to start families, there are pros and cons to pregnancy at any age.

In her 20s. During a woman’s early 20s, she is biologically at her most fertile. Ovarian eggs are more likely to be fertile because over 90% of them are free of chromosomal abnormalities. They also have a 78% to 86% likelihood of conceiving within a year.

It is well accepted in the scientific community that a woman’s fertility begins to sharply diminish around her early to mid-30s.

In her 40s. When a woman reaches her 40, her fertility dramatically decreases. After trying for three months, a woman in her 40s has a 7% chance of becoming pregnant. Further, some women enter the pre-menopausal stage, when their chances of becoming pregnant decline to between 5-6%.

One of the most important factors in a woman’s fertility and her ability to conceive is the quality of her eggs. An embryo created from a high-quality egg has the greatest potential for survival, implantation in the uterus, and healthy pregnancy. An aneuploidy is an ageing ovary produces more eggs with abnormal amounts of chromosomes. Egg production and quality will decline as time goes by. It is more likely that an egg will contain chromosomal abnormalities if it is older, which increases the risk of having a kid born with a disability. But in most cases, abortion happens.

Miscarriages become more common, and pregnancy rates decline as a woman’s egg supply decreases. When she approaches her mid-to-late-30s, these changes become most noticeable. Age is, therefore, the most accurate indicator of egg quality.

All of a woman’s egg-bearing potential is there at birth (approximately 1 to 2 million). Ovaries house eggs (in follicles) at various stages of development, but, as time passes, the eggs’ quantity and calibre drop. She will have roughly 300,000 eggs in her ovarian reserve by the time she enters adolescence. She will only ovulate a few hundred eggs in all her reproductive years.

Neither pregnancy nor its potential consequences are limited to women of a certain age range; rather, they have distinct impacts on women of varying ages. Women of advancing maternal age may have a unique set of risks and difficulties related to fertility that must be considered when they plan for a pregnancy. Research shows, however, that even healthy older women can have pregnancies with complications.

According to American Society for Reproductive Medicine guidelines, women over the age of 35 who have had regular, unprotected sexual contact for at least six months without conceiving are urged to consult a fertility specialist.

Unfortunately, no definitive test for ovarian reserve can tell a woman how many eggs she has left or whether or not the egg she is producing in a particular month is healthy. Even though there are a number of common tests that are used to estimate ovarian reserve, these estimates are always approximate. A doctor can tell if you are ovulating and assess your overall fertility using the following

Based on abnormal ovarian reserve test findings alone, it is impossible to predict who will or will not become pregnant. Some younger women who otherwise have healthy reproductive systems have problems getting pregnant. Although results may fluctuate from cycle to cycle, a history of abnormal tests indicates a fertility decline.

Ovarian reserve decline (DOR) is characterized by low egg quality, low egg quantity, and low reproductive potential, all of which can lead to infertility. DOR is measured by a high FSH level on day 2 or 3, a low AMH level, and a low antral follicle count (AFC). It is important to remember that the presence of DOR does not inevitably indicate infertility.

Advice on Conceiving and Pregnancy Preparation

There are things you can do if you’re trying to have a baby to ensure that you have a safe and comfortable pregnancy – and that your child is healthy.

In vitro fertilization is abbreviated as “IVF.” This one is particularly well-known among the many forms of assisted reproductive technology (ART). IVF uses various medical and surgical techniques to increase the likelihood of fertilization and implantation of the fertilized egg. Thousands of women who were previously unable to have children are now mothers because of the availability of IVF treatment options for women over the age of 30. For many women whose reproductive years are winding down, IVF represents their best chance of having a healthy child.

Egg freezing (also known as oocyte vitrification, oocyte cryopreservation, and/or fertility preservation) is a method through which women who aren’t currently pregnant but would like to have children in the future can store their eggs safely for use at a later time. When medicine is used to stimulate egg production in the ovaries, the mature eggs can be harvested and frozen for later use.

Check out the Egg Freezing article if you want to know more about the procedure of freezing eggs or a personal account about egg freezing here.

Even if you aren’t ready to start a family in your 30s, now is an excellent time to begin monitoring your menstrual cycle if you haven’t already. How to? Day one corresponds to the first day of your period. The final day is the day preceding your next period. For most women, ovulation occurs 12 to 14 days before their next menstruation. Two to three days before ovulation and the day of ovulation are the most fertile times for conception. You can also use apps available on your phones to track the period, which will automatically keep track.

Although it may be challenging to find time for exercise when you’re trying to conceive, it’s important to do so regularly. The benefits of exercise extend beyond mere weight loss; a regular exercise routine is a good idea even if your weight is within the normal range. It has been shown to boost mental wellness, which is especially important while trying to conceive yet can suffer from high-stress levels. Beginner-friendly exercises include walking, moderate yoga, and cycling in the gym. Have self-control and persistence with your workouts, and you’ll see results faster.

According to research, strenuous activity has been linked to a decreased chance of ovulation and implantation failure, both of which can prevent pregnancy. However, a sedentary lifestyle has also been associated with decreased fertility. Your doctor can advise you on whether to ease up on your exercise program or increase the intensity.

Researchers have found that smoking lowers a woman’s fertility by lowering the number and quality of eggs she ovulates. Smoking also has a detrimental effect on the uterine lining, which makes embryo implantation more challenging. Because of this, smoking during pregnancy can raise the probability of a miscarriage. If you are serious about beginning or growing your family, we recommend that you quit smoking as soon as possible. The best thing is to quit smoking if you want to start or develop a family. Check out this article to see the timeline of benefits after quitting.

Having any certain meal or drink will not miraculously cause pregnancy. However, studies show that a healthy diet can improve your odds. These lifestyle choices positively impact the fertility rates of women and the sperm quality of men who eat healthily. Eating a diet as the Mediterranean one can help with fertility. All of these items are staples in the diet:

Excessive alcohol consumption might diminish a woman’s ovarian reserve and lead to menstrual cycle irregularities. Similarly, to smoking, it is strongly linked to an elevated chance of miscarriage.  The NHS advises against drinking alcohol when pregnant or attempting to conceive.

According to a study published in 2018, “psychological interventions for infertile women have the ability to reduce anxiety and depression and may result in considerably increased pregnancy rates.” It’s not surprising to hear anecdotal accounts of immediately getting pregnant after the mother has quitted her job despite trying for months or years to conceive.

According to experts, caffeine use should be limited while attempting to conceive and during pregnancy. Research shows that drinking more than 300 mg of coffee daily can harm fertility.

Aim For a Healthy Weight

Pregnancy success rates can drop with either excess or inadequate body fat. The reason is: that fat stores control your ovulation and sex hormones. Women with a body mass index (BMI) of 25 or higher have a more difficult time conceiving. True also if your body mass index (BMI) is under 19.

Many vitamins are useful for women to boost fertility and achieve pregnancy in 30s and 40s, here is the list of some other than usual supplements that can help.

Most people can get all the vitamins and minerals they need from a diet more akin to the Mediterranean diet. A blood test might help you pinpoint exactly where your body is missing.

It’s important to remember that a woman’s ability to conceive and the likelihood of experiencing a miscarriage vary with age. Fertility also declines with age in men, but at a lesser level. There are pros and cons to becoming pregnant at any age, whether in your twenties, thirties, or forties. In addition to your age, being emotionally and financially prepared to become a parent should also enter into your decision to establish a family. Many of the threats to mother and child have been reduced or eliminated thanks to medical progress. Following the above guidelines will ensure you have the best chance of success.

If you have been trying to have pregnancy for over six months or are over the age of 35, you should schedule an appointment with your doctor immediately. They might be able to diagnose the problem or recommend you to someone who can.

Diabetes. Diagnosis and its Risks and Hazardous Effects

Diabetes. Diagnosis and its Risks and Hazardous Effects

The Best Nutrition in Pregnancy. What to eat and what not to?

The Popular Body Shapes of Women. How to Identify and how Hormones Affect the Body Shape?

Freeze Eggs to be Free – Oocyte Cryopreservation is More Common than You Think.