We begin our existence as a single cell. That cell splits even further, and there are now two cells in total. This process continues, leading to four cells, then eight cells, etc. Cell forms tissues; these tissues form our organs. These organs connect and develop a system leading to an individual like us.
This division from a single cell to trillions of cells over time is called growth.
According to our genetics and conditions, we think growth is getting taller, fatter, or broader. But growth isn’t that simple; this growth comes with time, and as the body ages, the organs age too. It is referred to as organs aging.

THE RESEARCHES ON ORGANS AGING

Aging is about much more than grey hair and wrinkles. Anyone over the age of 30 is aware that aging affects various body parts to varying degrees. One 50-year-old has the quick metabolism of a teenager, while someone else’s metabolism is so creaky that he got type 2 diabetes—even though his immune system is that of a 25-year-old.

Scientists have been studying the subject for decades. There are presently around 300 hypotheses. Researchers at Stanford University in 2020 discovered at least 87 chemicals and microbes in the human body that might be used as “biomarkers” of aging. Using a group of volunteers over two years, the scientists determined that a variety of biological systems appear to be involved in the process of aging. They observed that they could categorize people into “ageotypes” depending on which organ or system their biomarkers were most closely tied to, rather than chronological age.
According to the researchers, a better understanding of how each organ ages might get us closer to avoiding or curing specific age-related disorders in the future as well.

While you may know how many birthdays you’ve had, this does not indicate that all of your organs age at the same pace.

According to a new study, not all of our body’s organs age equally. According to research published in the journal Genome Biology, Steve Horvath, a geneticist at UCLA’s medical school, has developed a novel method for determining the biological age of body tissue. Horvath developed the metric by analyzing data from 8,000 samples of 51 different cells and tissues. He investigated methylation, a process that alters the structure of DNA and regulates gene expression. This process transforms undifferentiated cells into specialized tissues.

But once tissue-specific cells are generated, they are exposed to substances that age them and modify their DNA. Heart cells, for example, have distinct DNA modifications than skin cells. It was observed that when we are born, our bodies expand rapidly. By the age of 20, the clock slows and becomes more steady. It was also discovered that various organs age at different rates, with breasts being among the “oldest” in the body. Breast tissue is two to three years older than the rest of a woman’s body, whereas healthy tissue surrounding malignant tissue is 12 years older.

Horvath also determined the age of cancer cells. According to the biological clock, tumor tissue is on average 36 years older than normal, healthy human tissue. This may help to explain why cancer becomes a more significant danger as we age. Additionally, the study discovered that a woman’s breast tissue matures many years more rapidly than the rest of her body, which may help explain why breast cancer is the most frequent kind of cancer in women. Please find out more about Breast Cancer and how to combat it. In our article, Click here.

Picture Courtesy: www.businessinsider.com/some-parts-of-your-body-age-faster-2013-10. This image shows at what average age the certain organs in males and females start to decline.

These DNA ages of tissues are different for men and women. The following table summarizes different organs aging.

HOW DO OUR ORGANS AGE? WHAT CAUSES IT?

Cells are the fundamental constituents of tissues and organs. All cells undergo modifications as they age. They grow in size and lose their ability to split and replicate—the number of pigments and fatty compounds within the cell increases, among other changes. Numerous cells either cease to function or begin to act improperly. Waste materials accumulate in tissue as we age. Lipofuscin, a fatty brown pigment, and other fatty compounds accumulate in numerous tissues.

Throughout age, all essential organs begin to lose function. Organs aging occurs as you age due to cell and tissue composition changes. Organs that are deteriorating steadily lose their ability to function. Most individuals do not feel this loss right away since they often do not require their organs to work to their maximum capacity.  Organs aging changes occur in every cell, tissue, and organ in the body, affecting the functioning of every human body system. 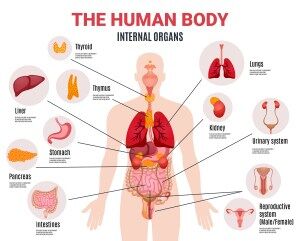 All organs have a reserved ability to perform functions over and above their normal requirements. Consider the fact that the heart of a 20-year-old can pump around 10 times the quantity of blood that is required to keep the body functioning. Approximately 1% of this reserve is lost each year beyond the age of 30.
The heart, lungs, and kidneys all undergo significant alterations in organ reserve. The quantity of reserve depleted varies across individuals and between organs within the same individual. These changes occur gradually and over an extended period of time. When an organ is overworked, it may be unable to maintain function and lead to illnesses in the future.

Aging can induce changes in the heart and blood vessels. For example, as you become older, your heart can’t beat as rapidly during physical exercise or times of stress as it did when you were young. However, the number of heartbeats per minute (heart rate) at rest does not alter dramatically with normal aging. Age-related changes may raise a person’s risk of heart disease. Long-term accumulation of fatty deposits in artery walls is a primary cause of heart disease.

Aging can alter the heart and blood arteries, increasing an individual’s chance of getting cardiovascular disease. That is why adults 65 or older are more prone to develop heart disease.

Your lungs’ greatest capacity for air—your total lung capacity—is around 6 liters.  As with other organs, age has its toll on the respiratory system. The ability to perform at the highest level steadily diminishes over time.

By the time a person reaches the age of roughly 20-25, the lungs have matured. After the age of 35, their function begins to deteriorate, and as a result, breathing might gradually become more complex. In an individual without lung illness, most of these alterations are caused by changes in the circulatory and muscular systems, not by the lungs themselves. Other significant changes include:

Being one of the organs that age the fastest, the kidney exhibits age-related declines in some structures and functioning.

The Stomach and Digestive System

The prevalence of some gastrointestinal problems is alarmingly high among the elderly. For example, more than half of senior residents in care facilities suffer from chronic constipation, and up to 74% of this population uses laxatives on a regular basis.

HOW DIFFERENTLY DO MEN AND WOMEN AGE?

Without a doubt, men and women age differently, and so do their organs. Genetics, lifestyle, diet, and environment affect how people of either gender age, but men and women age at a completely distinct rate and pace. Let’s discuss how aging differs between men and women.

The illustrations for men’s and women’s organ aging are based on text descriptions. The healthspan and longevity trends are from Li et al., 2021.

HOW TO COPE UP AND REDUCE THE PACE OF ORGANS AGING?

Aging experts believe that there are positive actions you can take to make your “golden years” more joyful and healthy. Additionally, they may add a decade or more to your life.

While you cannot change your age, you may slow the organs aging process by making wise decisions along the way. Everything from the foods you consume to your exercise routine to your friendships and retirement plans has an influence on how quickly or slowly your body organs age.
Want to learn more about aging and how to combat aging physically? Read our well-researched article here.
Tags
aging antiaging heart aging organs aging organs health
AimenDecember 6, 2021
657 13 minutes read
Show More

What is Cancer - Complete Overview About Cancers and How to Cope Up With Someone Who Has it?