After every four seconds, someone is being diagnosed with Alzheimer’s disease. It is the most common cause of dementia and affects 40 million people worldwide. But how it develops in such a larger number of people and how one can delay its onset. this all will be covered in this article.

Alzheimer’s disease is a kind of dementia that progresses over time. Dementia is a blanket word that refers to a variety of illnesses caused by brain injuries or diseases that impair memory, thinking, and behavior. These alterations obstruct ordinary life.

Alzheimer’s disease accounts for between 60% and 80% of dementia cases, according to the Alzheimer’s Association. The majority of persons with the condition are diagnosed beyond the age of 65. If this disease is detected before that period, it is referred to as early-onset Alzheimer’s disease.

Dr. Alois Alzheimer’s, a German psychiatrist was the first one to describe the symptoms in 1901 when he noticed them in a patient who was admitted to hospital with some peculiar behaviors like sleeping difficulties, dramatic mood changes, weakened memory, and increasing confusion. When the patient passed away, he was able to do the autopsy and found some different irregularities in the brain structure.

What he found beneath the microscope were visible differences in brain tissue in the form of misfolded proteins called plaques and tangles. These plaques and tangles work together to break down the brains’ structure. Plaques are formed when the fatty membrane surrounding the nerve cells gets sliced up by particular enzymes which results in beta-amyloid proteins. These proteins are sticky in nature and have the ability to clump together forming plaques. When a plaque is formed they block signaling between the cells and also triggers the immune reaction also progressing to the destruction of an abnormal nerve cell.

In Alzheimer’s, the neurofibrillary proteins are built with a special protein named tau protein. Tau protein ensures that the network of cells (those transport nutrients and other essential molecules) are straight and that molecules may readily flow through them. However, in Alzheimer’s disease, these straight proteins disfigure into twisted strands or tangles which leads to the restriction of nutrients reaching the cell causing cell death. This all starts in the hippocampus, where short-term memories are made. Changes in the levels of this protein can occur around 15 years before the onset of symptoms. Then these proteins proceed to target other sections of the brain by producing distinct signal-related alterations which cause different stages of the illness.

The Early Onset Alzheimer’s. Alzheimer’s generally affects adults over 65. It can develop in persons in their 40s or 50s. This is called early-onset Alzheimer’s. This kind of Alzheimer’s affects 5% of those with the disease. Early Alzheimer’s symptoms include mild memory loss, difficulty focusing, and finishing tasks. One may lose track of time and language. Mild visual issues, including difficulties judging distances, can arise.

Alzheimer’s disease has a significant impact on cognitive performance, even if the disease initially advances gradually. The symptoms progressively increase over time, and their severity varies according to the illness’s stage. Alzheimer’s appears with a variety of symptoms that differ from person to person.  Memory issues are frequently one of the earliest indicators of Alzheimer’s-related cognitive decline. Some common symptoms are mentioned below; 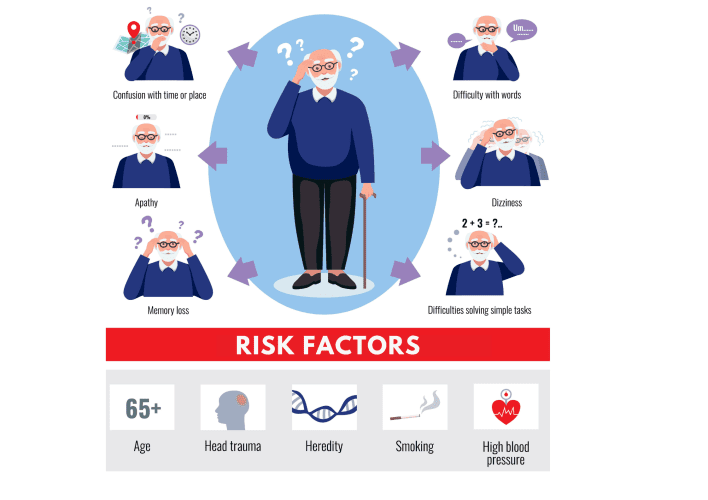 Dementia is just a symptom of Alzheimer’s and can be because of many reasons. To have a detailed comparison of both, and for better learning of the term dementia here.

According to the Centers for Disease Control and Prevention, over 90 percent of patients with Alzheimer’s disease do not exhibit any symptoms until they are over 60 years old.

Researchers are still unsure about the exact causation of Alzheimer’s disease. There is unlikely to be a single reason, but rather a combination of circumstances that influence each individual differentially.

Possessing one or more of these risk factors does not automatically preclude you from developing Alzheimer’s disease. It only increases your chance.

STAGES AND SEVERITY OF ALZHEIMER’S DISEASE

The following is the typical progression of this disease: 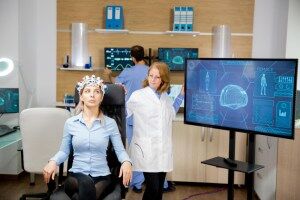 There’s no definitive test for Alzheimer’s disease. However, the doctor will likely do several tests to determine a diagnosis. These can be mental, physical, neurological, and imaging tests.

Alzheimer’s disease has no known cure, however, there are therapies available that can delay its course. If you or a loved one has been diagnosed with Alzheimer’s disease (AD), you are probably aware that there is currently no treatment. However, FDA-approved drugs can help to prevent or delay the onset of cognitive (thought-related) AD symptoms. Memory loss and difficulty thinking are among these symptoms. Continue reading to learn about existing medications and those under development.

To date, it has been shown that drugs have only a limited influence on the progression of Alzheimer’s disease once symptoms begin to manifest. The focus of research has mainly switched to avoiding symptoms from occurring in the first place.

Among the other therapies for Alzheimer’s disease is Cognitive Behavioural Therapy (CBT), which can help people manage their behavioral symptoms and feel more comfortable in their own skin.

If you have a family member or friend who has Alzheimer’s disease, you may want to consider being a caregiver. This is full-time work that is often difficult but maybe quite rewarding in the long run. The majority of individuals who are living with Alzheimer’s disease are now being cared for at home by family members. Caregiving may have both positive and negative effects on the person who is being cared for, as well as on the carer. It may provide personal pleasure to the caretaker, such as the gratification that comes from assisting a family member or friend, and it may also result in the development of new skills and the strengthening of family ties.

It takes a tremendous amount of effort to care for someone who has Alzheimer’s disease. As a caregiver, one will feel a wide range of emotions. They require assistance and support, as well as time away from the responsibilities. People can benefit from support groups by learning about and exchanging best practices and ideas for coping with challenging situations. Caregivers must prioritize their own health as well as the health of the person they are caring for.